Countries Are Concentrating on Improving Their Maritime Surv 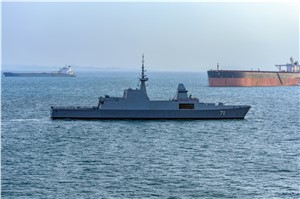 Despite possessing separate borders, maritime conflicts are frequent in regions where nations struggle for control of populated and unoccupied islands. The majority of the boundaries of several military superpowers, including those of the United States, Britain, France, Germany, Russia, China, and Japan, are encircled by seas. There are several overlapping claim issues in the South China Sea between China, Taiwan, Vietnam, the Philippines, and Malaysia. Following the occurrence of these problems, nations are placing a greater emphasis on safeguarding their maritime boundaries. Countries are concentrating on improving their maritime surveillance due to rising risks in international waterways, which is anticipated to propel sea-based platforms to see the biggest market growth.

How has COVID-19 had a significant negative impact on the Border Security Market?
COVID-19 has caused cross-border trade to be disrupted, creating a "new world" of trade costs. These include updated procedures, more border checks, and updated paperwork specifications for traders and shippers. Impacts differ depending on the product, firm size, trade route, mode of transportation, and region, affecting supply chains differently in different nations and industries.

Technology might be able to help border security organisations reconcile some of their competing goals, including the need for quick but secure border checks as well as a balance between cost-effectiveness and traveller convenience. Automated border controls, also known as e-gates, have enhanced border inspections at numerous border crossing points around the world, particularly at air borders. The automatic controls are simple to use and are well-liked by airport patrons. There is no reason why e-gates cannot read medical data securely, just as they can read biometric data.

External Threats Are Usually Posed by Terrorists
Terrorists, who mostly come from outside, are the main source of external dangers. The Federal Bureau of Investigations and the Border Patrol are connected to the Department of Justice. These organisations' duties in the US include gathering intelligence and upholding border security legislation. After the September 11 attacks, these agencies, as well as others, reorganised their goals and tasks.

The prevention of terrorist activities has also been a priority for the Department of Homeland Security. One of the most infamous terrorist organisations, which claimed responsibility for planning and carrying out terror acts against Americans and American interests, was led by Osama bin Laden. Some of the terrorist organisations that have been identified as being behind assaults that have taken place on US soil include Hezbollah, Hamas, Al-Qaeda, and the Mujahidin.

Increased Geopolitical Uncertainty and Threat Scenario
National spending on defence preparation has increased as a result of the threat environment and increased geopolitical instability. According to SIPRI, defence spending was USD 33,810 million, or 7.0%. The growth has occurred despite the fact that the global economy has slowed significantly and that trillions of dollars are being spent on healthcare and fiscal stimulus programmes. As clients want to obtain low-cost operational capabilities against the growing internal and external threats, the trend is positive for the defence sector, especially UAVs. UAV adoption will rise over the next ten years as a result of their low cost of ownership and increased operational capabilities brought on by developments in ISR, AI, and ML. UAVs also have a short life cycle, which will encourage more people to buy them. The tendency is considerably more pronounced in East Europe due to increased funding for military UAVs.

Securing the Border Requires More Than Just Physical Infrastructure
Border security calls for more than simply physical infrastructure. On the border, technology has long been utilised to spot trespassers, give situational awareness through monitoring, and improve agent reaction. According to a DHS Office of Inspector General Report, CBP has received more than $700 million for border technology deployments, but the majority of the intended upgrades have not yet been made. The CBP must carry out these technological rollouts or divert the cash to other objectives or requirements. Additionally, the General Accountability Office and OIG have pointed out that CBP lacks the proper instructions to gather ample and trustworthy data on the success of its technological implementations. Technology is still a crucial tool for border security, but CBP must address problems with the acquisition and deployment of systems that have already been approved and funded, as well as with its evaluations of how well those systems perform in terms of border surveillance, situational awareness, and the identification and classification of border crossings.

The Increasing Use of Artificial Intelligence in Border Zones
By gathering enormous quantities of data to better analyse risks, enhance forecasts, and carry out activities much more quickly than would be achievable by humans, the emergence of artificial intelligence (AI) promises to simplify operations in industries like health care, human resources, and commerce. The same can be said for border management, as governments and proponents of new technology highlight AI's promise to help safeguard international crossings more effectively and, in certain situations, more safely. Authorities in recent years, especially in the US and the EU, have pushed fast to incorporate "smart border" AI capabilities into their operations, signalling a possible paradigm shift in how governments can monitor their borders.

Tell a friend:
Countries Are Concentrating on Improving Their Maritime Surveillance Due to Rising Risks in International Waterways