Airbus C295 Onboards the Sustainability Journey With a 1st D 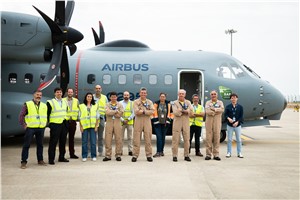 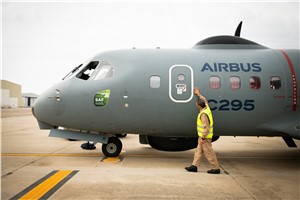 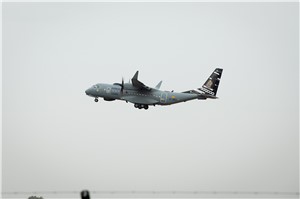 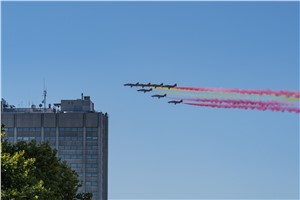 Airbus C295 is next in the race towards a more sustainable military aviation among Airbus Military Air Systems, following the first demo flight with SAF performed by Airbus A400M last summer. With a load of 29% blended SAF in its two engines, the C295 performed a successful first flight in Seville which helped to pave the way towards the final goal: to achieve 100% SAF capability for Airbus military aircraft and the decarbonisation of military aviation.

9.00 am on Wednesday, 19 October. The C295 team in charge of the SAF project met for an early morning briefing prior to the flight scheduled for that same day. The crew, the fuel team, engineers, pilots, flight test engineers… all gathered in the meeting room of the Airbus San Pablo Plant in Seville, going once again through the flight plan before take-off.

“With up to 50% of blended SAF, no modifications are required on the aircraft”, explained Jose Antonio Urbano, R&D Chief Engineer at Airbus Defence and Space. “So we are performing this demo flight to fully understand the aircraft behavior and to derive the necessary conclusion in preparation for future test campaigns with SAF”, he added.

The C295 would fly with a load of 29% blended SAF in both engines, so there was no need to modify the engines´ systems and the team faced no technical limitations on the preparation of the flight. “Although we know it would not be necessary with this SAF percentage used, the approach taken for this flight was to put the aircraft under the most demanding conditions in order to gather the necessary inputs for future 100% SAF operations. Our objective is to measure the aircraft performance with both fuels - Jet-A1 and SAF -, shut down and restarting the engines on flight, sudden movement of the power control levers to produce intense fuel demands, a rejected landing, manoeuvers of approach and go around after performing the final landing, requesting the maximum negative power”, explained Juan José Baeza, Flight Test Engineer at Airbus Defence and Space.

The wishes for a good flight concluded the briefing session. Then, the crew headed to the Flight Line, where the MSN163 awaited after having performed the requested ground tests and pre-flight tests on the previous days. The crew for this particular flight - Alejandro Grande, Alfonso de Castro, Pedro J. Martin and Juan J. Baeza - boarded the aircraft. Meanwhile, the team on the ground was busy with the refuelling manoeuvers, with a slight change on their normal procedure: The two PW127G engines of the MSN163 would be running, for the first time, with a load of 29% blended SAF.

Much like the A400M first flight with SAF conducted in July 2022, the drop-in fuel used for this flight is also the HEFA type (Hydroprocessed Esters and Fatty Acid) made of residuals of oils, vegetables and fats, and is also free of aromatics and sulphur. One of the main benefits of using SAF is reduced carbon emissions of 80% on average today over the entire lifecycle of the fuel.

Although the use of blended SAF doesn´t require any kind of technical modifications on the aircraft, challenges remain on the production side. “One of the biggest challenges we are currently facing is still the SAF supply. There is a high demand of SAF, but not many producers”, shared Urbano while MSN163 was still in the air. While SAF production currently accounts for only 0.1% of total aviation fuel production, this figure is expected to increase dramatically in the coming years to meet both growing demand from operators and upcoming SAF usage mandates.

After an almost two-hour flight, the MSN163 landed back in the Flight Line. Once on the ground, the crew nominated Baeza to proudly share the first impressions. “The flight has been of great value for us to prepare for future 100% SAF operations, and we feel privileged to be the ones to fly this aircraft with SAF onboard for the first time and be part of this exciting project”. Urbano echoed this feeling: “This demo flight helps us at Airbus Defence and Space to collect information and enable further research activities and technical work in order to reach the goal of 100% SAF capability for Airbus military aircraft”.

With 285 aircraft ordered and 38 operators in 34 different countries, the C295 has achieved more than 500,000 flight hours in all types of environments demonstrating the effectiveness and soundness of its system design. These are the amazing facts and figures of the `workhorse´. But now, as part of Airbus' commitment with the industry’s ambition to achieve net-zero carbon emissions by 2050, it is time to reset the counter to `zero´ and start counting the more sustainable flight hours Airbus will bring among its military aircraft, on its path towards the final decarbonization of military aviation.

Another step on the roadmap to cleaner military operations was taken in January 2022, when the Airbus C295 Flight Test Bed 2 (FTB2), the in-flight demonstrator of the European Clean Sky 2 (CS2) and the EU Horizon 2020 research and innovation programme, started a flight campaign as part of Airbus’ desire for a more sustainable future aviation. The modifications on the FTB2 included new materials and technologies designed to achieve reductions in noise, CO2 and NOx emissions - all to be applied on different platforms in the future.

Paving the way towards 100% SAF

With the first A400M demo flight with SAF in July 2022, Airbus Defence and Space with its Airbus Military Air Systems unit kicked-off a flight campaign aiming to assess the impact of unblended SAF on military aircraft in view of certifying the use of SAF blends that exceed today’s 50% limit.

“With SAF playing a predominant role in the short, medium and long-term for decarbonisation of aviation, these test flights are part of the ambitious cross-divisional and worldwide project that contributes to the Airbus purpose: to pioneer sustainable aerospace for a safe and united world”, said Jean-Brice Dumont, Head of Military Air Systems at Airbus Defence and Space.

In parallel to using drop-in SAF which is already approved for aircraft using up to 50% blend of SAF, Airbus is currently exploring the feasibility of higher concentrations. Studies are currently ongoing to understand the benefits of flying with 100% SAF before the end of the decade.

During the Spanish National Day on the 12th of October, the C-101 of the Spanish Air Force, which are part of the so called “Patrulla Águila”, flew with a blend of SAF on board.

This milestone is the result of the activities and tests undertaken in Madrid and Albacete by the SAF working group of BACSI led by the Spanish Air Force in collaboration with Airbus, Repsol and ITP Aero.

BACSI is the "Connected, Sustainable and Intelligent Air Base" initiative that aims to increase the effectiveness, productivity, efficiency and sustainability of the Spanish Air Force through innovation, including technological developments related to sustainable aviation fuel.

Airbus aims to collaborate and work together with its customers, and will remain part of BACSI and the SAF working group in the future to support in the development of knowledge and capabilities for the use of SAF in different Spanish Air Force combat aircraft platforms.

Tell a friend:
Airbus C295 Onboards the Sustainability Journey With a 1st Demo Flight With SAF