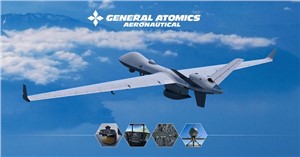 “This air-to-air demonstration was a major success and marks a critical milestone for GA-ASI’s Lasercom development team,” said GA-ASI Vice President of Mission Payloads & Exploitation, Satish Krishnan. “The success of this flight will pave the way for more opportunities to demonstrate crosslinks from aircraft to other platforms, including unmanned aircraft, maritime vessels, and space systems.”

The aircraft flew out of Montgomery Field in Kearney Mesa, Calif. on Sept. 26, 2022, and performed the test in segregated airspace near Yuma, Ariz. During the flight test, the team maintained a link at 1.0 Gigabits per second (Gbps) and exchanged data, including real-time navigation, video, and voice data.