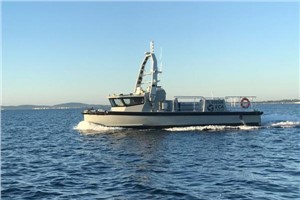 Since May 2019, Exail has successfully completed a series of milestones in the design phase up to the Critical Design Review, validating systems design and confirming compliance with customer requirements.

The next milestone is the Test Readiness Review of the Toolbox planned at the end of 2022, to ensure that when the drone systems are delivered in 2024, they will be operational, compliant with the requirements and that operators and crews will be trained and documented to make optimum use of them.

Upcoming sea trials in presence of Belgium Navy crews
The customer is involved at each stage of the qualification process of the tools and their Launch & Recovery Systems (LARS). Sea trials of prototype vehicles will take place in the next three months to test the new functionalities of the A18-M Autonomous Underwater Vehicle (AUV). Prototypes of the LARS and the Inspector 125 Unmanned Surface Vessel (USV) are currently undergoing sea trials to test all the required functionalities and to improve their operation.

Upstream prototyping – leaving nothing to chance
Given the dimension of this programme and the expectations regarding its deliverables, Exail is manufacturing prototypes of each robotic autonomous system composing the Toolbox to verify the functionality and performance of the systems and to prepare for system qualification and acceptance by the customer, while respecting the overall schedule.

Ongoing collaboration with customer navies
In parallel, as part of the Operational Testing & Evaluation (OT&E) Programme of the Royal Netherlands Navy, Exail has provided a number of tools, including the MIDS and the A18-M AUV with its platform launch and recovery cage. The OT&E programme enables the Royal Netherlands Navy to prepare and test new operational doctrines for the drones as early as possible in the pre-delivery phase.

As part of the OT&E, the Royal Netherlands Navy’s teams will evaluate the performance of the rMCM tools, the operation of the LARS and the associated UMISOFTTM software suite. They will also be able to prepare the subjects of task allocation, maintenance and training.

Objectives are two-fold: firstly, to enable the Royal Netherlands Navy to produce the necessary operational documentation, and secondly, to provide feedback from the crews operating them, based on their use experiences of the systems in real conditions. Exail’s aim is to supply the navies with an improved and fully operational toolbox thanks to customer feedback.

Background:
In 2019, the Belgian and Royal Netherlands navies awarded the Belgium Naval & Robotics (BNR) consortium, made up of Naval Group and ECA Group, now Exail, the contract to supply 12 vessels, 6 for each country, and around 100 drones dedicated to stand-off MCM at sea. Delivery of operational systems will begin at the end of 2024. The two navies, who already lead the way in the field of mine countermeasures, were seeking to replace their MCM capability. They chose BNR’s solution, which offers a new approach as the first operational stand-off MCM system to be based on a fully integrated toolbox of drones, with the UMISOFTTM suite, a complete mission management, data management and tool control software.