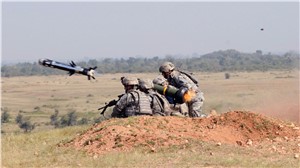 The Javelin Weapon System is a difference-maker for operational commanders around the world. With an increase in global demand for the precision weapon system, the Javelin Joint Venture is responding to support our U.S. Army, U.S. Marine Corps and international customers.

Javelin is developed and produced by the Javelin Joint Venture, a partnership of Raytheon Missiles & Defense and Lockheed Martin. The versatile shoulder-fired and platform-employed guided missile system offers fire-and-forget capability over its full range – up to 4 kilometers.

Meeting the Demand Signal
The U.S. and allied partners rely on Javelin’s proven capabilities to deter and defend against threats worldwide. Recently, the U.S. and several allies have sent Javelin missiles to Ukraine in support of their military and security forces.

In May and again in September 2022, the Javelin Joint Venture was awarded production contracts for Javelin rounds and support. More than 3,100 of the missiles procured will go toward replacing systems sent to Ukraine.

To meet this new demand, Lockheed Martin is increasing the missile production rate beyond the current 2,100 per year to nearly 4,000 per year.

Several large investment projects will also go toward upgrading equipment and tooling to increase manufacturing efficiency and reduce production down time. Additional staff are also being hired to the Javelin production line as well as up and down the supply chain to help reach the new max output rate.

“The production and workforce investments we’re making now will allow us to rapidly deliver this critical capability to our customers. The Javelin Joint Venture is committed to meeting this increase in demand,” says Dave Pantano, Javelin Joint Venture vice president and Lockheed Martin Javelin program director. “We’re working closely with the U.S. Army to meet this new demand and support customer readiness worldwide.”

“We remain committed to delivering this exceptional weapon system to warfighters around the globe,” says Marek Wolert, Javelin Joint Venture president and program director at Raytheon Missiles & Defense. “We are focused on accelerating our production rates and lowering our lead times to optimize our capacity and throughput to support our customers.”

Evolving for the Future Fight
Javelin is expected to be in the U.S. Army’s operational inventory through 2050. To evolve with customer needs, Javelin has planned upgrades to retain overmatch and support emerging operational needs.

The latest Javelin variant, the F-Model, is currently in full-rate production and boosts increased lethality and commonality across its userbase. The multi-purpose warhead provides versatility to our soldiers for every mission by eliminating the need for different rounds for different targets. The F-Model also increases effectiveness against current and future armor, including explosive reactive armor, soft targets and light armored vehicles.

The new Light Weight Command Launch Unit, or LWCLU, brings a 30 percent reduction in size and a 25 percent reduction in weight while doubling target detection and recognition. The LWCLU also incorporates sensor, display and image processing upgrades to provide high-resolution video imagery to the operator, even in adverse weather and battlefield obscurants. The LWCLU is compatible with all current, past and future Javelin variants.

The Javelin Joint Venture received a $33 million contract in June 2022 to begin LWCLU low-rate initial production and is scheduled to begin deliveries in 2025.

“As we enter into Low Rate Initial Production for the LWCLU, we are leveraging existing capital equipment and infrastructure to seamlessly transition from our active CLU efforts,” Wolert added.

To date, the Javelin Joint Venture has produced more than 50,000 Javelin missiles and more than 12,000 reusable Command Launch Units. Both Lockheed Martin and Raytheon Missiles & Defense stand ready to support the increased demand for our partners now, and in the future.