US, Japan, and the ROK Conduct a Trilateral Ballistic Missil

US, Japan, and the ROK Conduct a Trilateral Ballistic Missile Defense Exercise 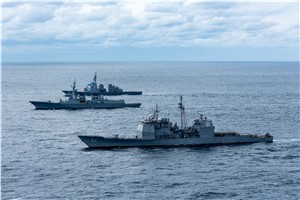 This exercise enhances the interoperability of our collective forces and demonstrates the strength of the trilateral relationship with our Japan and Republic of Korea (ROK) allies, which is forward-leaning, reflective of our shared values, and resolute against those who challenge regional stability.

Also this week, the United States conducted air exercises with our ROK and Japanese Allies, as well as a joint tactical missile live-fire exercise with the ROK.

We remain committed to peace and prosperity through the region in order to secure a free and open Indo-Pacific.

Tell a friend:
US, Japan, and the ROK Conduct a Trilateral Ballistic Missile Defense Exercise