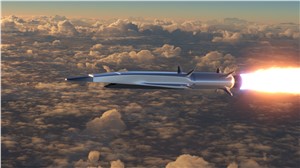 The Air Force awarded Raytheon Missiles and Defense a $985,348,124 contract to develop and demonstrate Hypersonic Attack Cruise Missile prototypes, underscoring the U.S. Air Force’s focus on increasing interoperability with allies and partners to stay ahead of strategic competitors.

HACM is an air-launched, scramjet-powered hypersonic weapon designed to hold high-value targets at risk in contested environments from standoff distances.

"HACM is a powerful example of developing and integrating combat capabilities alongside our partners from the beginning," said Air Force Chief of Staff Gen. CQ Brown, Jr. "HACM will provide our commanders with tactical flexibility to employ fighters to hold high-value, time-sensitive targets at risk while maintaining bombers for other strategic targets."

“We have over a decade of cooperation with our Australian allies in the advancement of hypersonic technologies, and now we will bring that shared knowledge to bear to address urgent national defense requirements,” said Andrew Hunter, assistant secretary of the Air Force for acquisition, technology and logistics.

Through the SCIFiRE agreement, the U.S. and Australia will continue collaborating on HACM design and development, including using Australian test infrastructure for the initial all-up-round flight tests.

Air Vice Marshal Robert Denney, AM, Head of Air Force Capability for the Royal Australian Air Force, said SCIFiRE is providing an opportunity to understand and influence the future of hypersonic weapons development and acquisition.

“SCIFiRE demonstrates our commitment with the U.S. to strengthen capability outcomes, deepen our alliance and strengthen our cooperation as we meet emerging challenges and support regional endeavors.”

The Air Force plans to deliver a HACM capability with operational utility by fiscal year 2027.