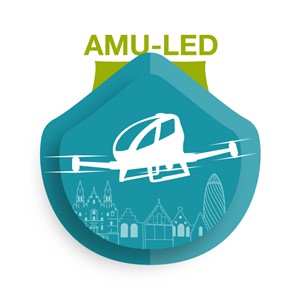 Drones delivering packages, flying out emergency medical supplies or carrying out inspections of buildings in the city: it sometimes sounds like science fiction, but before drones can genuinely fly through airspace in large numbers, an air traffic control system for unmanned aircraft must be set up. Together with its European project partners, Royal NLR is testing the precursor of one such system. The first results are promising: recent test flights as part of the European AMU-LED project went without a hitch.

Drones make all kinds of useful applications possible, from inspecting infrastructure to assisting the emergency services and flying urgent goods in. Today, most drones are operated by a drone pilot in the immediate vicinity of the aircraft who not only ensures the successful execution of the intended mission but also takes action as soon as a risky situation arises locally, for instance because a helicopter is approaching.

In the future, drones will increasingly fly beyond the visual line of sight (BVLOS) of the pilot, or even without a pilot because they can fly autonomously. And it does not stop at small drones with just a camera underneath: cargo and passenger transport by drones and electrical vertical take-off and landing (eVTOL) aircraft are also possible. We then refer to it as ‘urban air mobility’ (UAM).

BVLOS and autonomous drone aviation demand new technology that will ensure drones can avoid not only each other but also manned aircraft. Unmanned traffic management (UTM) is one such technology. UTM provides the foundations of what in Europe is called ‘U-space’: a specially designated part of airspace that manned and unmanned air traffic can safely use simultaneously.

Ultimately, U-space has to ensure the orderly flow of all air traffic within a specific zone. Among other things, the system lets drone operators enter flight plans or mark an area within which a particular drone flight will take place. Drones are connected to the system so that they can transmit their current position and direction of flight. As soon as a conflict is imminent, for example when two flight paths cross, the system intervenes to avoid a dangerous situation. A high level of automation is intended to ensure that this also works at a large scale.

AMU-LED
U-space is still under development at the conceptual level. Before drone operators in Europe can use U-space on a large scale, the requisite development, testing and simulation must be done. The AMU-LED project (Air Mobility Urban – Large Experimental Demonstrations) has been set up for this, a European Commission H2020 project. The project aims to show that future drone applications can be implemented in the urban environment in a way that is safe and publicly acceptable.

NLR is one of seventeen European consortium members and is therefore playing an important role in the AMU-LED project. NLR not only coordinates technological discussions but also plays a leading role in preparing various demonstration flights. These are taking place in various European countries, including the Netherlands. During the two-year project period, a hundred flying hours will be logged above urban environments.

Various scenarios will be run through during these demonstration flights, each involving different technological and procedural aspects. The lessons learned in the process will shape the final UAM ecosystem. Public acceptance is a leitmotif throughout the demonstrations: how do city residents perceive the presence of drones in public spaces from the safety, privacy, noise pollution or visual disturbance points of view?

First demonstrations in the Netherlands
Several demonstration flights were made over Amsterdam in early August as part of AMU-LED, the first of a series of test flights in the Netherlands. Witnessed by a focus group, various scenarios were run, ranging from flights by a commercial delivery drone to a surveillance flight by a police drone and a high-priority medical drone flight. To make sure nothing was left to chance, the scenarios were practised extensively in advance at the NLR Drone Centre in Marknesse.

These test flights were coordinated from NLR by Marta Tojal Castro, an R&D Consultant at NLR. The demonstrations were preceded by numerous consultations with stakeholders. Drone flights over urban areas may be highly automated in the future, but we are a long way from that yet. Making these test flights possible needed not only intensive discussions with technical partners in the project such as AirHub, Space53 and the UTM developer Altitude Angel but also procedural discussions with the local authorities, the Ministry of Defence, the Human Environment and Transport Inspectorate (ILT) and Air Traffic Control Netherlands (LVNL).

The first scenario was run on 1 August at the NLR office in Amsterdam. An NLR drone pilot took off with a physical drone for a fictitious mission and a simulated delivery drone flew in from the Olympic Stadium shortly afterwards. This was picked up by Altitude Angel’s UTM system and the drone pilot was then instructed to switch to ‘loiter’ mode: hovering in place until the danger had passed. This scenario went smoothly, barring a minor discrepancy during the normal compass calibration of the drone.

The second scenario, carried out on 4 August, was a lot more complex. The demonstration consisted of two parts, both carried out over the Navy site in the centre of Amsterdam. For safety reasons, the area they were flying above was cordoned off and observers made sure that nobody who was not involved could enter the area. Additionally, radio contact was maintained with the Schiphol control tower.

The first part was line-of-sight flight for the pilot while another drone approached. Here, too, the system correctly issued a warning instruction to loiter. The second part involved BVLOS flight for the first time. A drone carried out a pre-programmed waypoint mission. At the same time, an incoming high-priority medical drone flight was simulated from the OLVG Hospital in Amsterdam East. The system provided tactical deconfliction in good time, after which both drone flights could be safely continued.

A positive outcome
Tojal Castro looks back with satisfaction on the first test flights in Amsterdam. “The scenarios played out as planned. The Altitude Angel UTM system handled the tactical deconfliction interventions as expected. There was some tension as to whether all the flights could go ahead in Amsterdam because the space for drone flights near Schiphol is still limited, but it all worked out nicely thanks to the good cooperation with LVNL. There was also constructive cooperation with the Ministry of Defence and the Amsterdam Drone Lab team.”

The members of the focus group, which was part of the public acceptance section, seemed a little disappointed with the demonstrations during the debriefing.
“They had expected more of a spectacle – very large drones, or drones flying around each other,” explains Tojal Castro. “The demonstrations that were actually carried out were a pretty boring watch. But that’s probably a good sign: the futuristic vision of countless drones flying about is nowhere near reality yet. And the one medical drone that did fly overhead was probably not even noticed by most people.”

Her colleague Jens Ten Thije, an R&D Engineer at NLR, continues. “The system worked perfectly and as expected. The only remark I would have had is that some of the warning messages were shown fairly late. But that was logical: in this scenario, the drones were deliberately made to approach each other pretty closely. In reality, the system would have intervened much earlier to avoid the tactical conflict even happening.”

Several drones have also been flown simultaneously in Enschede, including emergency service drones and Avy’s medical drone. Other UAM scenarios were then run at the end of August as part of the test flights in the Port of Rotterdam. All the results will be incorporated in the project’s final report. Further test flights will be carried out, for instance in Spain, before the AMU-LED project is rounded off. AMU-LED will be formally concluded early in 2023.