This news is classified in: Defense MRO Navy Contracts 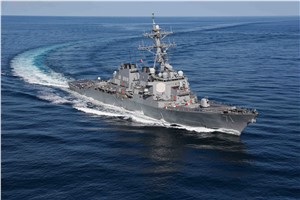 BAE Systems has received a $107.7 million contract from the U.S. Navy to modernize the guided-missile destroyer USS Ross (DDG 71).

Under this extended dry-docking selected restricted availability (EDSRA) contract, the company will perform the modernization work at its  Norfolk, Virginia shipyard. The contract includes options that, if exercised, would bring the cumulative value to $123.8 million.

During the EDSRA, BAE Systems will dry-dock USS Ross to perform maintenance on the underwater hull, repair the ship’s main propulsion system, preserve internal ballast and fuel tanks and external superstructure, and rehabilitate crew berthing and dining compartments. The modernization project is scheduled to take more than 500 days and be completed in April 2024. Once complete, the ship will be capable of serving in the fleet for another 10 years. The 16-year old ship recently completed a seven-year operational period in Rota, Spain as a forward-deployed U.S. Navy combatant.

“This is an important job for our employees, subcontractors, and the Navy to accomplish,” said Mike Bruneau, vice president and general manager of BAE Systems Norfolk Ship Repair. “We look forward to meeting the long-term maintenance goals for USS Ross to sustain the future capability and readiness of the ship.”

The USS Ross was commissioned in June 1997. The ship is named after the first Medal of Honor recipient of World War II, Donald K. Ross. While serving aboard the battleship USS Nevada (BB 36) during the attack on Pearl Harbor on December 7, 1941, Ross valiantly helped the badly-damaged ship get underway during the attack. USS Ross is part of the Arleigh Burke class of destroyers.

BAE Systems is a leading provider of ship repair, maintenance, modernization, conversion, and overhaul services for the Navy, other government agencies, and select commercial customers. The company operates three full-service shipyards in California, Florida, and Virginia, and offers a highly-skilled, experienced workforce and talented program managers, seven dry-docks and railways, and significant pier space and ship support services. The company’s Norfolk shipyard has over 1,100 employees, and works with the Navy and several subcontractor companies to accomplish its ship sustainment work.