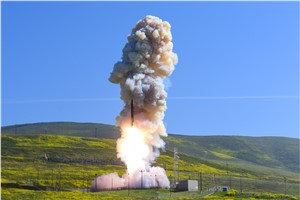 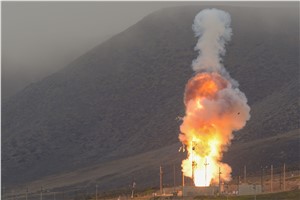 Last year, the Missile Defense Agency awarded contracts to Northrop Grumman and Lockheed Martin to advance development of its next generation interceptor, or NGI program — a key component of its ground-based midcourse defense, or GMD, system. Both companies have said they are on track to deliver faster than what the government initially asked, according to the director of the Missile Defense Agency.

"I will tell you both companies are saying they can get to first emplacement earlier than the government reference schedule of 2028," said Navy Vice Adm. Jon A. Hill, during a virtual discussion Friday with Defense News. "I will tell you that there is a long road between now and then. And so, we'll just keep on path. Both are performing very well. Two different designs, both incorporating multiple kill vehicles — that's where the threat drives us."

Continued development of the GMD program is the top priority for MDA, said Hill. Also on his list of priorities are the defense of Guam and countering the threat posed by hypersonic missiles.

On Guam, the MDA is working with the Army on the initial steps of placing missile defense capabilities on the island, Hill said. Plans for that system are included in the president's 2023 budget submittal.

"The nice thing about PB23, it does lay down the basic architecture of the systems that will go on to Guam," Hill said. "The department did fund us at a level that allows us to start environmental impact surveys. That allows us to do the sighting work."

Last week, MDA finished a "sighting summit" and was able to visit each site in Guam which has been proposed as a location for elements of missile defense there, Hill said.

"It's not final, but we have a very good feel for at least technically and operationally where things should go in order for it to function as a system," he said.

"What's great is both systems kind of have a crossover in what they can do," he said. "And so the integration of those into a command suite with command-and-control battle management on top of it is the basic architecture."

For development of the glide phase interceptor, of GPI program, part of a defense against hypersonic missiles, the MDA in early 2021 initially chose three contractors to compete on the design. In June, the MDA narrowed it down to just two companies, Northrop Grumman and Raytheon, said Hill.

"We developed the glide phase interceptor concept because when you look at that threat, its vulnerability occurs in the glide phase," Hill said. "It's through its ballistic boost, or its through its launch or it's coming up as a cruise missile. But when it's in that glide phase, that's where it does broad maneuvers, that's where it's bleeding off heat, [and] that is where it's the most vulnerable. And you can track it, and you can see it and you can develop fire control on it. And we know that we can do that now. So what we're missing is that weapon."

Hill said following winnowing the selection from three companies to two, MDA is on path to a system requirements review later this year for GPI.