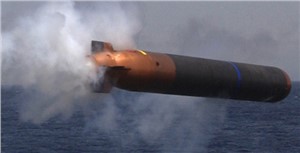 Aerojet Rocketdyne has officially opened its Center of Excellence for Undersea Propulsion to support the U.S. Navy's next generation torpedoes. The first of its kind in the nation for industry, the facility will be used to produce the innovative undersea propulsion known as Stored Chemical Energy Propulsion System (SCEPS) and the entire torpedo afterbody.

"Having the only SCEPS manufacturing capability within the U.S. industrial base will enable our company to further support our nation's undersea warfare needs," said Eileen P. Drake, Aerojet Rocketdyne CEO and president. "For more than 60 years, Aerojet Rocketdyne has powered critical U.S. Navy systems, and we look forward to expanding our capabilities to support the evolving needs of the U.S. Navy and our allies."

The new manufacturing facility will be used to support production for existing Aerojet Rocketdyne contracts, including the MK 54 MOD 2 Advanced Lightweight Torpedo prototype.