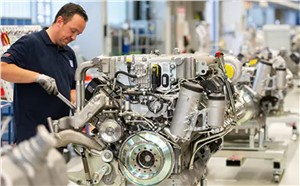 mtu engines from Rolls-Royce power many of the vehicles and ships on which the operational readiness of the German and many allied armed forces depends. In order to contribute to the security of Germany and allied nations, and to be able to meet the increased demand for mtu engines for military applications as a result of the shift in security policy in a timely and reliable manner, the company is building up expanded capacity over the coming years. Rolls-Royce plans to hire up to 450 additional employees in its Power Systems business over the next ten years, depending on the specific order situation. Delivery capabilities are to be enhanced through the expansion of facilities and assembly lines. In this way, Power Systems is consciously demonstrating that the company intends to remain a reliable and trusted partner for the armed forces of Germany and its allies.

The most important vehicles and ships with mtu drives include the Puma infantry fighting vehicle, the Boxer armoured transport vehicle and the Leopard 2 main battle tank, as well as the K130 corvettes and U212 submarines. Following events in Ukraine, the German government and other nations decided to procure vehicles and ships of these and other types in larger numbers than originally expected. Consequently, this requires more mtu engines and propulsion systems.

Thelse Godewerth, Chief People Officer and Labour Director at Rolls-Royce Power Systems, said: “We very quickly grasped the situation and proactively worked out a concept for delivering engines and systems at short notice and on schedule as soon as orders come in, despite disrupted supply chains and raw material bottlenecks. We developed this concept in close coordination with politicians, procurement authorities, end customers, manufacturers and our suppliers. It is clear that we will not be able to handle the new orders we expect in the coming months and years with our existing workforce and equipment. That is why we will invest to guarantee our delivery capability as military demand increases and so support the operational readiness and capabilities of the armed forces of democratic nations.”

Knut Müller, Vice President Global Governmental at Rolls-Royce Power Systems, said: “With our long-term planning, we are laying the foundation for a new agile cooperation between procurement authorities, armed forces and industry. In order to be able to meet the current and future challenges together, we also need concrete commitments from politicians as soon as possible as to which vehicles and ships are to be procured in which specific quantities. Only then can we, together with our suppliers, reliably guarantee that mtu systems will be delivered on time. This is also an important contribution to maintaining key technological capabilities and highly qualified jobs in Germany.”

Beyond the supply of existing propulsion and energy solutions, Rolls-Royce Power Systems is currently developing sustainable and climate-neutral technologies that can play a major role in the modernisation of armed forces in the future. These include hybrid drives, microgrids and fuel cells. Already today, many mtu engines can be operated with sustainable fuels, the production of which binds as much CO2 as is released during combustion. In this way, even existing combustion engines can be operated in an almost climate-neutral manner. These efforts are part of the “Net Zero at Power Systems” strategy with which Rolls-Royce Power Systems aims to become climate-neutral by 2050.

Rolls-Royce pioneers the power that matters to connect, power and protect society. We have pledged to achieve net zero greenhouse gas emissions in our operations by 2030 (excluding product testing) and joined the UN Race to Zero campaign in 2020, affirming our ambition to play a fundamental role in enabling the sectors in which we operate achieve net zero carbon by 2050.

Rolls-Royce Power Systems is headquartered in Friedrichshafen in southern Germany and employs around 9,000 people. The product portfolio includes mtu-brand high-speed engines and propulsion systems for ships, power generation, heavy land, rail and defence vehicles and for the oil and gas industry as well as diesel and gas systems and battery containers for mission critical, standby and continuous power, combined generation of heat and power, and microgrids and is intensively engaged in the development of climate-neutral solutions.

Rolls-Royce has customers in more than 150 countries, comprising more than 400 airlines and leasing customers, 160 armed forces and navies, and more than 5,000 power and nuclear customers.

Annual underlying revenue was £10.95 billion in 2021, underlying operating profit was £414m and we invested £1.18 billion on research and development. We also support a global network of 28 University Technology Centres, which position Rolls-Royce engineers at the forefront of scientific research.

Tell a friend:
Rolls-Royce Power Systems Invests in Order to Make Important Contribution to Security of Germany and Allied Nations