Safran, Airbus and CNES at the Forefront of Earth-to-Space O

This news is classified in: Defense Aerospace Communications Space

Safran, Airbus and CNES at the Forefront of Earth-to-Space Optical Communications 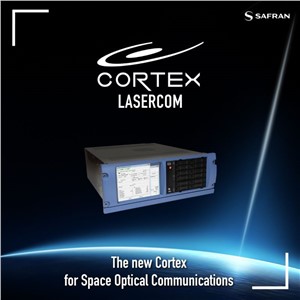 In partnership with CNES and Airbus Defence and Space and as part of the TELEO project, Safran Data Systems has successfully delivered the first in a series of digital modems dedicated to Earth-to-Space optical communications, the Cortex Lasercom.

Laser optical communications will enable data rates 10 to 100 times higher than the radio frequency communications currently used. As the successor to the Cortex HDR, the world's leading satellite imagery reception modem, Safran Data Systems has developed the Cortex Lasercom modem with processing and decoding capabilities to achieve a record 10 Gigabytes per second bit rate for Earth-to-Space optical communications, a level unmatched anywhere in the world.

The Lasercom Cortex will be used in several cooperative projects between Safran, Airbus and CNES, and will equip future Optical Ground Stations (OGS) marketed by Safran. These OGS will allow communication with all future satellites that will carry laser communication capabilities with the Earth. Two demonstrations on Airbus and CNES programs will take place in 2023, a world first: LASIN on the CO3D constellation of imaging satellites, and TELEO on the future BADR-8 telecommunications satellite. On this occasion, the Lasercom Cortex will be equipped with error-correcting codes developed by Airbus Defence and Space, which allow it to deliver useful and error-free information to the user.
Cortex LASERCOM

François Gaullier, Senior Vice-President Telecommunications Systems at Airbus Defence and Space said: “Airbus is pleased with the excellent cooperation with Safran Data Systems on the ground modems for its future 10Gbit onboard-ground optical communication systems that will be demonstrated during the TELEO flight experiment in 2023.”

Finally, Caroline Laurent, Director of Orbital Systems and Applications at CNES, emphasized that “CNES is committed to developing a predominantly French industrial base dedicated to future space telecommunications systems using optical links offering speeds of several tens to several hundred Gigabytes per second. In this context, the Lasercom Cortex is the culmination of several years of R&T and development and technical cooperation between Airbus Defence and Space, Safran Data Systems and CNES.”

Tell a friend:
Safran, Airbus and CNES at the Forefront of Earth-to-Space Optical Communications