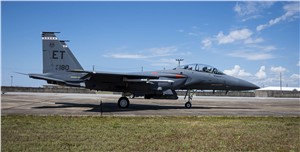 During the June 30, 2022 test, the missile was fired from an F-15E Strike Eagle and guided toward an aerial target at long range. The primary objective was to prove out sub-system integration to support all phases of guided flight. The test also demonstrated full system integration and performance.

“Our warfighters deserve to have the most advanced technology in the air when they need it,” said Paul Ferraro, president of Air Power at Raytheon Missiles & Defense. “F3R upgrades multiple circuit cards to address obsolescence, enhances the weapon’s capabilities, and extends the production line for the U.S. Air Force, the U.S. Navy, and our Allied partners.”

The live fire was the first of five planned missile shots in an integrated test series for the AIM-120D3 to qualify the new configuration for production and fielding. These tests incorporate various scenarios and targets to prove out the weapon’s advanced functionality and capabilities. An additional live fire for the Foreign Military Sales AIM-120C8 variant will occur in the near future. These live-fire tests are the culmination of captive flight tests, workup flights, and simulations.

Under the F3R program, engineers used model-based systems engineering initiatives and other digital technologies to upgrade multiple circuit cards and hardware into the guidance section of the missile and to re-host legacy software in the AIM-120D3 and AIM-120C8 AMRAAMs. Over the past year, F3R software was merged with SIP 3F advanced software capabilities to accelerate the fielding of this combined upgrade to the warfighter.