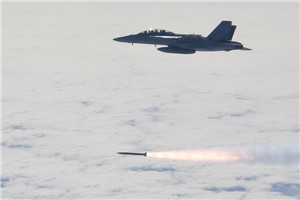 The State Department has made a determination approving a possible Foreign Military Sale to the Government of Australia of AGM-88E2 AARGM E2 Missiles and related equipment for an estimated cost of $94 million. The Defense Security Cooperation Agency delivered the required certification notifying Congress of this possible sale today.

This proposed sale will support the foreign policy and national security objectives of the United States. Australia is one of our most important allies in the Western Pacific. The strategic location of this political and economic power contributes significantly to ensuring peace and economic stability in the region. It is vital to the U.S. national interest to assist our ally in developing and maintaining a strong and ready self-defense capability.

The proposed sale will improve Australia’s capability to meet current and future threats by suppressing and destroying land- or sea-based radar emitters associated with enemy air defenses. Destruction or suppression of enemy radar denies the adversary the use of air defense systems, thereby improving the survivability of its tactical aircraft. Australia will have no difficulty absorbing this equipment into its armed forces.

The principal contractors will be Northrop Grumman Information Systems (NGIS), Ridgecrest, CA. There are no known offset agreements proposed in connection with this potential sale.

Implementation of the proposed sale will require U.S. Government and contractor representatives to visit Australia on a temporary basis in conjunction with program technical oversight and support requirements, including program and technical reviews.