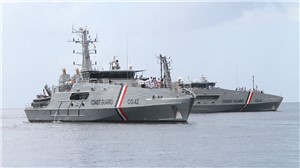 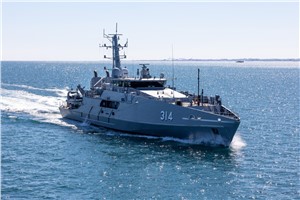 Austal Limited (ASX:ASB) is pleased to provide information about a number of contracts that Austal has secured, which help to diversify the Company’s long-term revenue base while utilising its shipbuilding and support expertise.

Austal has recently been awarded contracts to:

Combined, the awarded contracts are worth more than A$300 million.

“The Trinidad and Tobago support contract is another example of Austal constructing and then maintaining patrol vessels to ensure that they can operate safely and efficiently over extended durations, while providing important longer-term revenue to Austal.”

“The two additional Evolved Cape-class Patrol Boats announced by the Australian Government two months ago have now been officially ordered, bringing the total number of vessels to be constructed to eight; demonstrating great confidence in the vessel platform by the Royal Australian Navy, who are already operating three of the patrol boats throughout Northern Australia.”

“The competitively awarded, US$128 million contract for the Floating Dry Dock is Austal USA’s second steel vessel program for the US Navy and clearly demonstrates the Navy’s confidence in the Mobile, Alabama shipyard’s growing capability to deliver aluminium and steel vessels.”

The two 58 metre vessels, TTS Port of Spain (CG41) and TTS Scarborough (CG42), will be sustained by Austal in-country, through to at least 2024.

“We have been very clear that we want to grow Austal’s support business and this is a perfect example of how Austal can support vessels constructed so that not only do the vessels continue to perform optimally for our clients, but also create a recurring revenue stream post-construction,” Mr Gregg said.

All remaining five vessels initially ordered are in various stages of production at the company’s Henderson, Western Australia shipyard. The additional two ECCPB’s, announced by the Australian Government on 18 April 2022 and valued at A$110 million (to be adjusted for relevant inflation impacts), bring the total number of vessels to be delivered to eight and extend production at the shipyard through to 2024.

Austal USA has commenced construction of two Navajo-class towing and salvage (T-ATS) vessels for the US Navy, marking the commencement of steel shipbuilding at the Company’s facility in Mobile, Alabama. Officially opened last month, the US$100 million facility was funded 50:50 by Austal and the United State Government.

The T-ATS program is a US$145 million contract to build two ocean-going tug, salvage, and rescue capabilities to support U.S. fleet operations and will be a multi mission common hull platform capable of towing heavy ships. These ships will be able to support current missions, including oil spill response, humanitarian assistance, and wide area search and surveillance.

The United States Navy’s new Auxiliary Floating Dock Medium (AFDM) will also be constructed at Austal USA’s steel manufacturing facility in Mobile, Alabama. The “Rennie” type floating dock will incorporate features to improve operability and maintainability, based on Austal USA’s experience from owning, operating and maintaining a similar dry dock at its repair facility in Mobile. With a lifting capacity of over 18,000 tonnes, length overall of 211 metres and working area of nearly 8,500 square metres, the dry dock will have the capability to service large vessels such as Littoral Combat Ships (LCS), Guided Missile Destroyers (DDG), Guided Missile Cruisers (CG) and Landing Ship Docks (LSD’s).