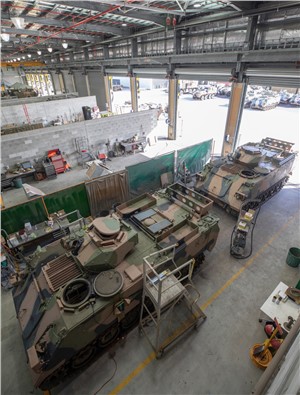 Loaded into a Ukrainian Antonov AN-124 aircraft, the four vehicles are the first of 14 M113AS4s to be provided by Australia.

Prime Minister, The Hon. Anthony Albanese said the latest shipment of military assistance responds to a direct request by the Minister of Defence of Ukraine for additional vehicles and demonstrates Australia’s sustained commitment to the people of Ukraine.

“Australia, like many nations, condemns the continuing unwarranted aggression of Russia against the people of Ukraine,” Mr Albanese said.

“Our nation has stood by Ukraine since the beginning of this unlawful conflict and we are proud to be able to provide access to significant capabilities such as the Armoured Personnel Carriers that have travelled in the past week.”

Deputy Prime Minister, The Hon. Richard Marles added “We will continue to look at ways we can best help the people of Ukraine. Australia stands with Ukraine, and again calls on Russia to cease its unprovoked, unjust and illegal invasion of Ukraine.”

Developed in Australia, the AS4 is a modernised variant based upon the highly effective M113 series which have served the Australian Army and many other forces with great success since the 1960s.

Along with the proven Bushmaster Protected Mobility Vehicles, the M113AS4s will provide valuable protected mobility for Ukraine forces, joining similar capabilities being gifted from across the globe.