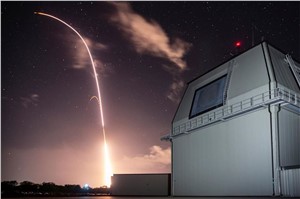 “The SM-3 Block IIA interceptor was developed in partnership with Japan, and it features a larger rocket motor and kinetic warhead that allow it to defend broader areas from long-range ballistic missile threats,” said Tay Fitzgerald, president of Strategic Missile Defense at Raytheon Missiles & Defense. “Our strong cooperation with Japanese industry was essential to the development of this next-generation solution that can defeat complex threats around the world from sea and land.”

The SM-3 interceptor is a defensive weapon the U.S. Navy uses to destroy short- to intermediate-range ballistic missiles. The interceptor uses sheer force, rather than an explosive warhead, to destroy targets in space. Its “kill vehicle” hits threats with the force of a 10-ton truck traveling 600 mph. This technique, referred to as “hit-to-kill,” has been likened to intercepting a bullet with another bullet.

The SM-3 Block IIA interceptor’s kinetic warhead has been enhanced, improving the search, discrimination, acquisition and tracking functions, to address advanced and emerging threats. The missile intercepted an advanced ballistic missile threat in its first live target test in early 2017.

The SM-3 interceptor is a critical piece of the Phased Adaptive Approach for missile defense in Europe. The interceptor is being carried by U.S. Navy ships deployed off Europe’s coast and is now operational at a land-based site in Romania, further enhancing Europe’s protection.