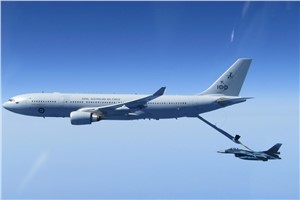 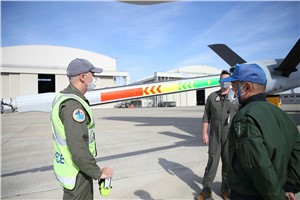 Conducted from April 4 to 27, the flight test engineering program in Japan involved a RAAF KC-30A Multi-Role Tanker Transport (MRTT) and Mitsubishi F-2 aircraft of the JASDF.

“Our ability to work seamlessly together will ensure we can continue to uphold and reinforce a secure, inclusive, and resilient Indo-Pacific region,” Air Vice-Marshal Goldie said.

“This flight test program is the culmination of two years of close cooperation between Australia’s Aircraft Research and Development Unit (ARDU), and the JASDF Air Development and Test Wing (ADTW).

“The RAAF and JASDF have cooperated in recent years on delivering relief following natural disasters in Tonga and Australia, and trained together during Exercises Cope North in Guam and Bushido Guardian in Japan.”

The RAAF operates a fleet of seven KC-30As from RAAF Base Amberley in Queensland, with each one able to carry more than 100 tonnes of fuel and refuel all compatible aircraft.

Air Attaché for the Australian Embassy in Japan, Wing Commander Alison Spark, said the KC-30A operated from Komaki Air Base in Nagoya, where the JASDF’s own KC-767 tanker transport fleet is based.

“Along with the units, there were two RAAF linguists supporting this flight test program, and an international engagement opportunity when the flight test team visited the JASDF’s English language school,” Wing Commander Spark said.

“The flight test program was conducted with the KC-30A using its tail-mounted Advanced Refuelling Boom System (ARBS) to ‘plug’ into a receptacle on a Mitsubishi F-2A (single-seat) and F-2B (dual-seat) aircraft.”

The ARBS can extend to 19-metres when deployed, and is controlled by air refuelling operator using fly-by-wire controls in the KC-30A’s cockpit.

The flight tests are carefully monitored by the refuelling operator using 3D display screens, as well as the F-2’s own crew, and a chase aircraft.

“Over a series of flights, aircrew and engineers ensure the mechanical compatibility between these systems, and that both aircraft can be flown safely in a range of configurations and lighting conditions,” Wing Commander Spark said.

“The test program involved nine flights between the KC-30A and the F-2, flown in a variety of conditions – daylight, dusk, and night-time.

“The F-2 also flew in a variety of configurations, from carrying no external stores to carrying fuel tanks and external stores, to ensure the aircraft could be safely refuelled during different missions.”

The flight test program will help facilitate Japan’s participation in Exercise Pitch Black 2022, which will take place in the Northern Territory this August.