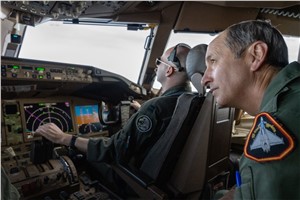 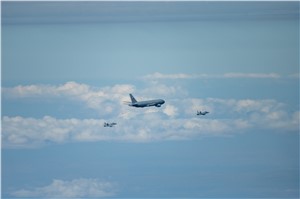 In a major milestone for the KC-46A Pegasus program, the aircraft refueled Spanish EF-18 Hornets, known in Spain as C-15s, April 18, during its first Employment Concept Exercise, or ECE 22-03, at Morón Air Base.

The mission marked the first international receiver for the KC-46A, paving the way for stronger interoperability with allies and partners.

“The KC-46A, its aircrews, maintenance and support personnel performed magnificently over the last seven weeks in Spain,” said Gen. Mike Minihan, commander of Air Mobility Command. “They pushed hard to run the aircraft through its paces during the ECE, including supporting a bomber task force, refueling U.S. fighters over Eastern Europe, and completing the first-ever refueling of an international aircraft. AMC continues to drive toward increased refueling capability while working to overcome programmatic challenges.”

According to Brig. Gen. Ryan Samuelson, AMC’s KC-46A Cross Functional Team lead, the Interim Capability Release plan, of which the ECE is a part, has significantly enhanced KC-46A operations over the last 10 months.

“The Pegasus is now cleared to support nearly 85 percent of joint force receivers requesting air refueling from U.S. Transportation Command,” Samuelson said. “While the ICR brought on KC-46 mission capabilities, the ECE will now operationalize those capabilities across a spectrum of mission scenarios.”

AMC introduced the second phase of ICR on March 10, when Minihan approved the employment of four KC-46As and approximately 220 active, Guard and Reserve Airmen to Moron AB to conduct the first of a series of ECEs designed to enhance operational fielding and sustainment of the KC-46A.

Throughout ECE 22-03, aircraft and personnel remained under AMC authorities as they validated desired learning objectives and prepared to support theater operational missions as required. The KC-46A ICR plan allows the Pegasus to conduct operational taskings that would otherwise be filled by the KC-135 Stratotanker and KC-10 Extender, increasing the force’s air refueling capacity and further seasoning total force Pegasus aircrews with operational missions.