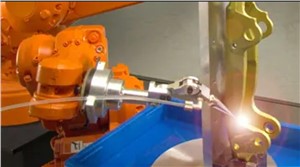 Curtiss-Wright Corporation (NYSE: CW) todayannounced the successful verification of the Curtiss-Wright Laser Peening process on the airframe components of the fifth-generation F-35 fighter jet. Curtiss-Wright has been selected to help extend the life expectancy of the F-35B, the short takeoff-vertical landing (STOVL) variant flown by the U.S. Marine Corps and other allied nations around the world, by utilizing its critical Laser Peening process. The verification was implemented by the Fleet Readiness Center East (FRCE) at the Marine Corps Air Station Cherry Point, NC and the first F-35B to undergo the treatment has been successfully returned to the fleet.

“Curtiss-Wright is honored to be part of this milestone through the utilization of our critical surface treatment applications, building on our commercial and industrial capabilities to support the military’s premier fighter jet program,” said Lynn M. Bamford, President and CEO of Curtiss-Wright Corporation. “We are excited to be part of the team that returned the first laser peened F-35B back to active service, and we look forward to a long and successful relationship with all of the stakeholders involved on other F-35 variants.”

The Laser Peening process was developed by the Curtiss-Wright Surface Technologies Division, a leading global provider of highly engineered surface treatments and analytical services. Laser Peening strengthens the aircraft’s frame without adding any additional material or weight, which would reduce its capability by limiting its fuel or weapons carrying capacity. The technology has wide applications across the defense, commercial aerospace, commercial nuclear and industrial markets.

A recently published FRCE press release talks about the successful completion of the verification and return to service of the first aircraft to undergo the procedure. In the press release Ike Rettenmair, the interim Fixed Wing Division director at FRCE, said “the teamwork between FRCE, the F-35 Joint Program Office, Lockheed Martin, Curtiss-Wright Surface Technologies and Northrup Grumman Corporation helped make the effort successful. We have a great partnership between the working entities and that makes all the difference.”

The verification marks FRCE as the first facility in the world capable of conducting on-site laser peening modification on an F-35 aircraft. A second facility, Ogden Air Logistics Complex at Hill Air Force Base, Utah, is now also fully operational and the first F-35B will be processed at that facility starting in April of 2022, followed shortly thereafter by the F-35C.