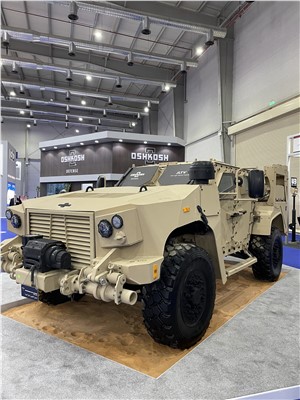 Designed using lessons learned from the Mine-Resistant Ambush Protected (MRAP) All-Terrain Vehicle (M-ATV), the JLTV platform provides MRAP-levels of protection to mitigate the most prevalent threats while delivering best-in-class off-road mobility in a highly transportable package. To date, Oshkosh has built over 15,000 JLTVs for the U.S. military and its allies. The U.S. JLTV program fills a critical capability gap for the U.S. Army and Marine Corps by replacing a large portion of the legacy uparmored HMMWV fleet with a light tactical vehicle with far superior protection, reliability, and off-road mobility.

“Achieving a tactical advantage on the modern battlefield requires speed and agility to get to the fight quickly, to outmaneuver threats, and to strike fast and hard,” said John Bryant, Executive Vice President of Oshkosh Corporation and President, Oshkosh Defense. “Oshkosh Defense designed the JLTVs to handle the full range of military operations – from limited contingencies to full scale combat operations. It’s the only light tactical vehicle with the protection and extreme off-road mobility with combat formations.”

The JLTV can be configured with many weapons systems, depending on the mission or threat environment. The JLTV is built to handle weapons from 5.56 up to 30MM cannons. These can be combined with a variety of medium and heavy anti-tank weapons systems, as well as air defense systems.

“We are honored to participate in the first edition of the World Defense Show in Riyadh, Saudi Arabia, and we look forward to meeting with our partners and reaffirming our commitment to the region,” said John Lazar, Vice President and General Manager, International Programs, Oshkosh Defense. “Over the years, Oshkosh Defense has delivered over 7,500 vehicles in the region, including thousands to customers in Saudi Arabia.”

Oshkosh M-ATVs will also be on display during the Royal Saudi Land Forces’ demonstrations at the World Defense Show.

“With thousands of Oshkosh vehicles operating in the region and existing demand from Saudi military branches, Oshkosh Defense is committed to the Saudi Vision 2030 objectives of enhancing the national military capabilities and supporting the development of the local military and security industries sector,” Lazar concluded.