ULA to Launch USSF-8 Mission in Support of National Security

ULA to Launch USSF-8 Mission in Support of National Security 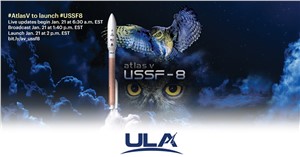 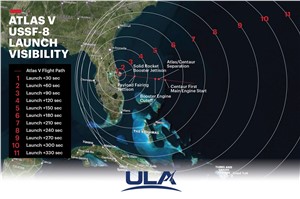 A United Launch Alliance (ULA) Atlas V rocket is in final preparations to launch the USSF-8 mission for the U.S. Space Force’s Space Systems Command. The launch is on track for Jan. 21, 2022 from Space Launch Complex-41 at Cape Canaveral Space Force Station. Launch is planned for 2:00 p.m. EST. The live launch broadcast begins at 1:40 p.m. EST at www.ulalaunch.com.

“Our first launch of 2022 will deliver space surveillance assets that expand the capabilities of the U.S. Space Force in support of national security,” said Gary Wentz, ULA vice president of Government and Commercial Programs. “We have been working collaboratively with the USSF team to prepare for this launch and keep our teams safe and healthy. We want to thank our mission partners for their continued teamwork as we complete the final preparations for launch.”

The USSF-8 mission will launch two Geosynchronous Space Situational Awareness Program (GSSAP) satellites, GSSAP-5 and GSSAP-6, to a near-geosynchronous orbit approximately 22,300 miles (36,000 km) above the equator. Data from the GSSAP satellites will contribute to timely and accurate orbital predictions, enhancing our knowledge of the GEO environment and further enabling space flight safety including satellite collision avoidance.

The mission will launch on an Atlas V 511 configuration rocket, that includes a 5-meter short payload fairing and stands 196 ft. (59.7 m) tall. The Atlas booster for this mission is powered by the RD AMROSS RD-180 engine. Aerojet Rocketdyne provided the RL10C-1 engine for the Centaur upper stage and Northrop Grumman provided the Graphite Epoxy Motor (GEM) 63 solid rocket booster.

This will be the 91st launch of the Atlas V rocket. To date ULA has launched 147 times with 100 percent mission success.

Tell a friend:
ULA to Launch USSF-8 Mission in Support of National Security