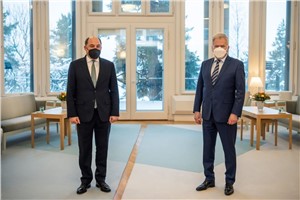 The Defence Secretary reaffirmed the UK’s determination to support European allies and uphold international stability on a three-day visit to Scandinavia this week.

The ministers also discussed increasing competition in the High North and how access to the region can be managed responsibly.
Defence Secretary Ben Wallace MP said:
"The UK and our Nordic partners are united in our approach to upholding European security."

"My discussions this week have been directly about deepening bilateral relations, shared security and the consequences of Russian aggression towards Ukraine."

"Our discussions were clear that a Russian invasion of Ukraine would be a strategic mistake, violating the most basic freedoms and sovereignty."

"Britain and the Nordic countries have a long and shared history. Our European neighbours and allies remain vital partners as we work together to defend our common values, counter shared threats and build resilience in our neighbourhood - the UK will always stand with them."

In Sweden, the Defence Secretary met with his counterpart Defence Minister Peter Hultqvist.

The Defence Secretary then travelled to Finland where he met with President Sauli Niinistö, Foreign Minister Haavisto and Defence Minister Antti Kaikkonen.

The UK’s Integrated Review and Defence Command Paper set out the UK’s commitment to the High North.

As a close neighbour to the Arctic, the UK is committed to working with partners such as Sweden, Finland and Norway to ensure that increasing access to the region and its resources is managed safely, sustainably and responsibly.

Sweden, Finland and Norway are all members of the UK-led Joint Expeditionary Force (JEF) – 10 nations working together to deliver forces at high readiness, across a range of roles, complementing NATO and European security.