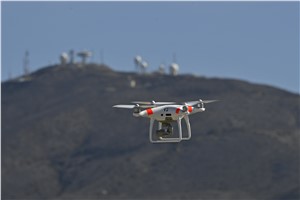 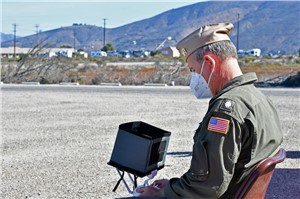 “The Low Speed Aerial Target- Small (LSAT-S) program developed a cost-effective target training and deployment program that directly represents the UAS threat the fleet faces daily,” said Pete Pena, PTMO Program Lead. “UAS are classified by their size, range, and speed, and are broken into five groups based on those attributes. We’re flying group 1 drones which are considered to be the greatest threat to military forces across the globe due to their unique range of capabilities as well as their relatively low cost and small size.”

In 2021, speaking at a U.S. Senate Committee, Gen. Kenneth McKenzie, commander, U.S. Central Command referred to the proliferation of small drones as the “most concerning tactical development” since the emergence of improvised explosive devices.

Groups 1-3 can range from over-the-counter handheld drones to medium sized drones with sensors and the capacity to deliver weaponized payloads. However, the main threat that comes from groups 1-3 is intelligence, surveillance, and reconnaissance (ISR). These drones can be difficult to detect and destroy due to their low flying altitude and small size.

“Point Mugu is a no drone zone,” said Fire Controlman 1st Class Petty Officer Michael Jordan assigned to NBVC. “It is difficult to obtain authorization to operate drones in this controlled airspace, even for military units; so, this demonstration provided a rare opportunity for watch standers to experience live drone flights and provide identification, which is the first step in countering threats.”

In 2019, Ellen Lord, the former undersecretary of defense for acquisition and sustainment, established a waiver system to authorize drone operations on military ranges in highly controlled conditions, to test the U.S. military’s counter-UAS capabilities.

Civilian and military operators had a chance to fly multiple different scenarios onboard Point Mugu, Pena added. Each test presented a range of conditions, spanning from the direction a UAS was flying to a variance in flight patterns, altitudes, airspeeds, and representative threats.

“This demo is a force multiplier which allows us to offer more frequent and robust counter-UAS presentations to the fleet and installation commanders,” said Cmdr. Todd “Jazz Hands” Faurot, LSAT-S pilot. “This increases our defenses during peacetime and also providing for a war time surge capability.”

The first step in countering the rising threat from UAS is target acquisition and identification. The proliferation of UAS (especially group 1-3), the downsizing of the technology, and its decreasing costs of production will make threat detection difficult.

“Our demonstrations provide the fleet with important UAS familiarization and training to face this increasing airborne threat,” added Pena.