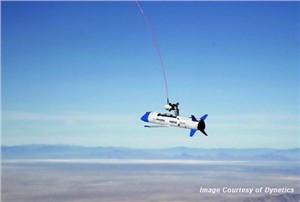 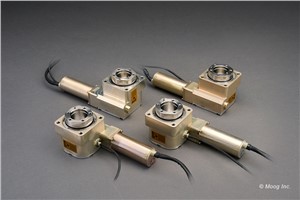 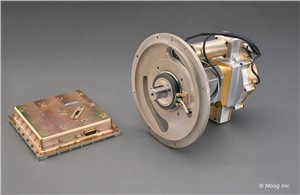 Moog Inc. announced today that the company’s hardware played a critical role in a historic milestone in unmanned aviation by successfully launching and retrieving an X-61A Gremlins Air Vehicle (GAV) during the program's fourth flight test event in October at the Dugway Proving Ground in Utah. The Gremlins demonstration system flew three GAVs to conduct four individual flight sorties for a combined 6.7 hours of flight, including the 1.4-hour airborne recovery mission. The overarching goal of the Gremlins Program, managed by DARPA's Tactical Technology Office, is to demonstrate aerial launch and recovery of multiple low-cost, reusable, unmanned aerial systems (UASs).

Moog’s electromechanical actuation systems provide precision motion control for several elements of the Gremlins demonstration system including GAV tail fin control, GAV wing deploy, and fin control for the attitude-controlled "Bullet" which is a key element in the recovery system. These actuation systems have been developed in a highly collaborative environment with Dynetics to achieve the rapid integration and flight test schedule that is expected for DARPA programs. The solutions leverage previously flight-qualified elements and commercial off the shelf (COTS) components striking a unique balance between reliability and cost that is essential to all successful programs. The electromechanical actuation system design allows for multiple sorties, enabling Dynetics to meet the critical goal of 24-hour refurbishment for return to flight.

Moog has been providing precision steering controls to weapons programs for 70 years and has been a leader in the transition from hydraulic and pneumatic actuation, to robust electromechanical actuation technologies. “Our development of application-specific systems over the last several decades has resulted in an extensive portfolio of flight-proven solutions,” said Mike Brunner, Moog Missile Systems Director. “In order to support the rapidly evolving needs of our warfighter, whenever possible we are shifting from the longer timelines associated with the traditional development of unique solutions, and instead, as an embedded teammate, work to fully leverage our proven solutions to bring low risk capabilities to our customers at a much faster pace.”

“In keeping with our mission statement of Equipping Those Who Defend Freedom, we are honored to be fielding the lethality centerpiece of the Army’s Maneuver-Short Range Air Defense Inc 1 program,” said Jim Riedel, Space and Defense Group Vice President. “In further support of the warfighter we are pursuing affordable and rapid modernization efforts through combat vehicle, counter drone, and directed energy options.”