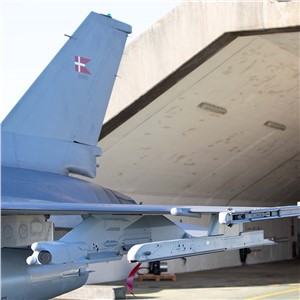 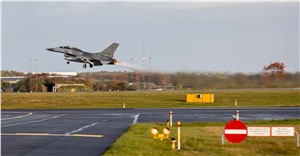 In late October 2021 a Danish F-16 conducted a series of flight demonstrations of the Leonardo Compact Jamming System (CJS) integrated in Terma’s ECIPS-pylon. The two companies are now ready to provide the integrated solution to potential customers.

Fighter jets like the F-16 have a need for protection and the ability to jam enemy radars. The Leonardo CJS-jammer has a small form factor and incorporates modern Digital Radio Frequency Memory (DRFM) technology, making it the obvious choice to integrate into the Terma modified F-16 Wing Weapon Pylon while still retaining the full use of the underwing station to carry standard external stores.

“ECIPS-CJS provides F-16 operators with a persistent, gold-standard DRFM jamming capability without taking up a weapons station, so it’s ideal for customers looking for a simple and cost-effective way to equip their aircraft with high-powered protection from radar-guided threats,” said Matt Glanville, Head of Strategic EW Campaigns, Leonardo UK.

Both companies have jointly invested and worked together to develop the concept over the last couple of years and during 2021 the system was tested at Terma and Leonardo System Integration Laboratories:

“Having supported the F-16 warfighter community for over 44 years, supplying over 15.000 pylons and 2.500 ALQ-213 EW Controllers, Terma is excited to be working with Leonardo to bring this advanced self-protection capability to the F-16 warfighter”, stated David Martin, Senior Vice President of Terma Aeronautics.

After thorough laboratory tests were passed successfully, the system was put to the ultimate test onboard a Royal Danish Airforce (RDAF) F-16 operated by the test pilot, “POL”. He conducted safety of flight sorties followed by several performance demonstrations against an RDAF radar test site with a challenging ground threat emitter.

Several different techniques were employed, and after the test flight, “POL” stated: “It has been a very positive experience to be part of the Terma/Leonardo demo programme and I am impressed with the performance of the system, especially since it was the first F-16 flight”.

Terma and Leonardo are now looking forward to discussing more details on the ECIPS-CJS with potential customers.