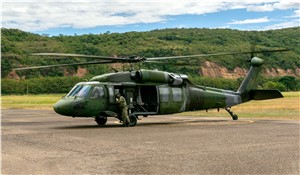 Sikorsky, a Lockheed Martin company (NYSE: LMT) and the Corporación de la Industria Aeronáutica de Colombia S.A. (CIAC) have signed a reseller agreement allowing CIAC to purchase Black Hawk® helicopter spare parts from Sikorsky for resale to the Colombian Army, Air Force and National Police. Advance procurement and storage of the material in Bogota, including processing of component repairs, will enable CIAC to quickly fulfill orders when required by the services, which collectively have acquired 97 UH-60L and S-70i™ Black Hawk aircraft.

“This reseller agreement gives CIAC exclusivity in Colombia to buy genuine OEM Black Hawk parts from Sikorsky, and then hold the parts in a local warehouse for supply on demand,” said Felipe Benvegnu, director of Sikorsky sustainment business development. “The effect of this arrangement will be to shorten lead times of critical items, which should ultimately result in improved operational availability of the Colombia’s Black Hawk fleets. We are delighted to expand our already strong relationship with CIAC to help keep these aircraft at peak flight readiness.”

The agreement with CIAC marks the first time that Sikorsky has collaborated with a commercial aerospace support provider to allow the resale of Black Hawk helicopter parts in Colombia. Owned by the Colombian Ministry of Defense, CIAC operates as an independent company.

Major General Iván Hidalgo, CIAC general manager stated: “I feel great pride that from within CIAC we can contribute to the strengthening of the national air power, by unifying the logistical support of the UH-60 fleets in Colombia. By achieving this consolidation for the first time, a strong and close relationship with the manufacturer allows us to continue working for the benefit of the Military Forces and the National Police.”

The CIAC reseller agreement builds on the close relationship already established between CIAC and Sikorsky-Colombia, a Sikorsky subsidiary. Together, the two companies work closely to manage the Black Hawk Flight Simulator Center at Luis Pinto Air Force Base in Melgar, Colombia. Operational since 2013, the center is used by instructors to train pilots for the COLAR, COLAF, and the National Police Black Hawk fleets, as well as for the Brazil Armed Forces.

Local storage of Black Hawk parts is similar to the ‘Forward Stocking Locations’ approach that Sikorsky has established in Europe, Asia, and Brazil. In those locations, Sikorsky stores components close to its commercial customers who fly S-92® and S-76® helicopters.