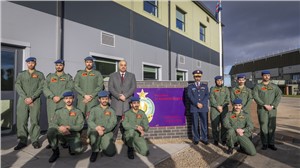 The establishment of a joint UK-Qatar training squadron will see BAE Systems, along with its partners, play a critical role in supporting the Qatar Emiri Air Force’s (QEAF) new fleet of Hawk Mk 167.

The Qatar-badged joint squadron will enable UK and Qatari personnel to train together using the most advanced version of the Hawk trainer aircraft in service today.  The nine Hawks along with 24 Typhoon aircraft were ordered in 2017 by the Government of Qatar, which included an availability support service for both jets as part of this comprehensive solution.

In addition to providing this service for the new 11 Squadron, BAE Systems will deliver live and synthetic training to QEAF and RAF pilots, preparing them with the skills required for life in the cockpit of fast jets, including Typhoon.

"This achievement today marks another major milestone in the development of our ongoing partnership with both the UK RAF and the Qatar Emiri Air Force. I am very proud of the integral role that BAE Systems is playing within the Joint Hawk Training Squadron, as we assist in the delivery of this vital capability alongside both air forces." Andrea Thompson, Managing Director Europe & International, BAE Systems Air

The Hawk is the world’s most successful and proven military aircraft trainer with more than 650 aircraft at the heart of training pipelines for the world’s leading air forces.  Hawk uses advanced airborne simulation to look, feel and function like the latest generation of combat aircraft, including Typhoon and the F-35 Lightning II.