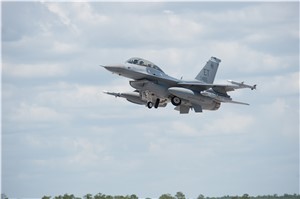 The StormBreaker smart weapon weighs just over 200 pounds, and up to 20 can fit on fighter jets like the F-15E Strike Eagle. But their warheads, equipped with shape charge jets, fragmentation and blast charge effects, and an option for a delayed smart fuze, are powerful enough to defeat tanks.

The smart weapon’s precision, power and versatility enable it to address a wide range of threats and scenarios.

“The multi-effects warhead really separates this air-to-surface weapon from its predecessor and other munitions in its class,” Howlett said.

Deployed on the F-15E, the StormBreaker smart weapon has a tri-mode seeker – that uses imaging infrared and millimeter wave radar – to see through fog, smoke and rain as it glides over 45 miles to strike both fixed or moving targets on land or at sea. The system can also use its semi-active laser or GPS guidance to hit targets. It’s engineered with the flexibility to engage a variety of threats in any environment.

“There’s more possible for StormBreaker – options like adding propulsion or swapping out the seeker depending on the mission. The hardware and software can cover a range of threats,” Howlett said. “It’s a very flexible weapon – one-of-kind with world class technology.”

Another key benefit of the StormBreaker system is its networking capabilities. This means one platform could launch it but hand off controls to another. That will be an important capability as the U.S. military aims to connect sensors, platforms and weapon systems across the traditional domains of land, air, sea and space.

“It’s certainly an advanced weapon in terms of its design and development and how we’re architecting it for the future. It’s extremely capable now and we’re just getting started,” Howlett said.

To verify system performance, the team uses an integrated flight simulation, or IFS, and literally runs thousands of iterations in tandem with the Air Force using data from testing to continuously improve simulation accuracy.

“It allows us to find and address potential issues before real-life testing, which drives down schedule and cost,” Howlett said.

“Each aircraft has unique software, so we need to ensure we’re integrating appropriately with that software,” Howlett said.

Arming 4th- and 5th-gen fighters
In 2020, the Air Force cleared the system for use on the F-15E, making it the first aircraft to carry the weapon. After achieving this milestone, the Air Force and Raytheon Missiles & Defense dropped 14 StormBreaker smart weapons in the 2021 Weapons System Evaluation Program. The successful evaluation and tactics development paves the way for its use by combat air forces.

The F-15E can carry five groups of four StormBreaker smart weapons, for a total of 20 munitions. Depending on the mission, the F-15EX Strike Eagle II can carry more than 16 StormBreaker weapons.

The F/A-18E/F Super Hornet will be the second fighter jet to add the weapon when it reaches initial operating capability.

Raytheon Missiles & Defense is integrating the StormBreaker weapon on the F-35 Joint Strike Fighter. The first-ever StormBreaker munition drop test from an F-35 was conducted in late 2021 to test the communication link between the weapon and a secondary aircraft.