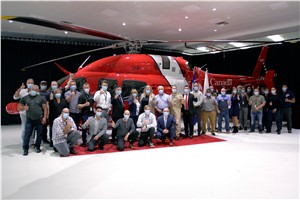 Since 2014, the Canadian Coast Guard and Bell Textron Canada have had a strong relationship that has strengthened during the renewal of the Coast Guard’s fleet of light and medium helicopters, comprised of seven Bell 412EPI and 16 Bell 429 helicopters. These helicopters provide support to ships engaged in critical maritime work including Aids to navigation, environmental response, icebreaking operations, and in support of search and rescue operations. The Canadian Coast Guard helps keep Canada's waters safe, clean, and more accessible to keep the Canadian economy moving.

For 35 years, Bell Textron Canada has designed, developed, assembled, and delivered leading-edge commercial helicopters in Mirabel to provide vertical lift solutions for operators, businesses, and government agencies all over the world – building a remarkable legacy as Canada’s helicopter company. Certified in 2009, the Bell 429 is the result of close collaboration with Government of Canada as well as provincial governments.

Today’s announcement represents the culmination of seven years of ensuring the Coast Guard has the equipment it needs. The building of the Coast Guard’s helicopter fleet in Canada by Bell Textron Canada contributed to growing Canada’s economy and ensuring good, well-paying jobs were available to Canadians. The work accomplished will ensure that Canadians are well-served by the Coast Guard in the years to come.

Quotes
“With this procurement, our Canadian Coast Guard’s light helicopter fleet is fully renewed. This is so important because a strong, well-equipped Coast Guard is one of the best ways to save lives on the water and protect our marine environment.” The Honourable Joyce Murray, Minister of Fisheries, Oceans, and the Canadian Coast Guard

“We are proud to contribute to the accessibility, sustainability, and security of our Canadian waters. Through our proven expertise and a well-established Canadian support network, Bell continues to serve citizens around the world. Our global workforce and Canadian industrial base celebrates together with the Canadian Coast Guard,  and Bell 429 operators across the globe. With this aircraft, CCG is now the largest Bell 429 operator.” Steeve Lavoie, president, Bell Textron Canada