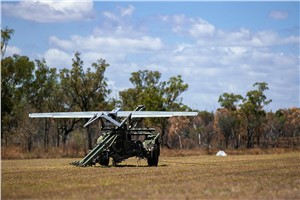 DASA’s Squadron Leader Malcolm Walker, an experienced pilot and flying instructor, said he was impressed by how Army operated its large and complex fleet.

“Such a large and diverse fleet presents a number of challenges, such as training, and, to use a pilot term, airmanship.

“It is very difficult to teach a soldier who flies a mobile phone-sized UAS to think like a pilot of a helicopter.

“Clearly, we don’t need the soldier to have all the training that the pilot has, but there are aspects of that we do want them to have.

“So the soldier’s airmanship needs to be scalable based upon the size and complexity of the UAS being operated.”

Another challenge for Army’s UAS capability is working closely with other militaries that have even larger fleets.

“There is a lot of learning that takes place between the USMC and Army that allows Army to advance its operations more quickly than if they didn’t operate closely together.”

The good news for Army’s UAS capability is that, while the DASA audit found areas for improvement, they were still assessed as exemplar operators.

“Army has been operating small to large UAS platforms for years and has learnt significant lessons in how to safely and effectively operate them in a variety of environments,” Squadron Leader Walker said.