Seeing Through the Fog of War 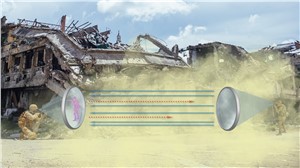 Dispersing clouds of obscurants in battle is a common military tactic that U.S. forces use to protect themselves from detection by adversary vision and sensor systems. The problem with current obscurants, however, is that they also degrade visibility and sensor performance of friendly troops. Additionally, obscurants designed to counter infrared systems are made of metallic flakes that are dangerous to breathe, requiring troops to wear respirators in combat.

Today, DARPA announced the Coded Visibility program, which aims to develop tailorable, tunable, safe obscurants that provide warfighters with an asymmetric advantage, enhancing their visibility while suppressing adversary vision and detection systems. A Proposers Day webinar to provide details on the program is scheduled for October 21, 2021.

“Coded Visibility aims to develop new types of obscurant particulates that can be tailored to allow U.S. and allied forces to see the enemy through the plume in one direction, while the adversary is unable to see through the plume in the opposite direction,” said Rohith Chandrasekar, program manager in DARPA’s Defense Sciences Office. “We call this passive asymmetry, somewhat like the concept of privacy-window film that allows vision through glass in one direction and not the other. We’ll also explore active asymmetry using novel materials that can be tuned in real time to potentially enable dynamic adaptation of the obscurant’s properties during a mission.”

DARPA will be working closely with DoD partner agencies to transition these advances at the particulate level to fieldable plume demos by the end of the program.

Tell a friend:
Seeing Through the Fog of War