Boxers Fire Up in Rugged Bout 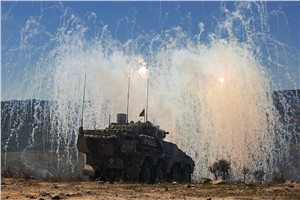 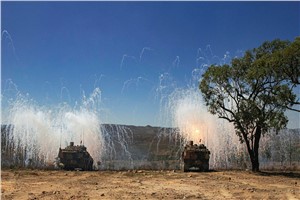 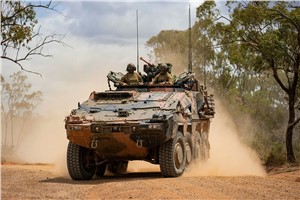 The training was held in the Townsville Field Training Area, with the personnel honing their skills with the vehicle through rugged terrain, and fighting a notional enemy across the landscape.

Having completed their transition training from the Australian Light Armoured Vehicle (ASLAV), this was the first activity where Boxer crews could fully test what they had learned, exercising a combination of old and new armoured fighting vehicle tactics.

Officer Commanding A Squadron Major Dan Solomon outlined the training the squadron had been conducting in the field, and how much they had achieved in a short period.

“The training has allowed drivers to conduct a variety of tactical tasks, allowing soldiers to start understanding the full capability of the vehicle, pushing it to its limits, testing it in a rugged environment, and developing valuable experience and knowledge of the platform,” Major Solomon said.

“The progression of our training has been quite rapid.

“The soldiers have responded well and managed to transition from the ASLAV over the past 12 months through their conversion courses.

“We used the vehicles over a mixture of open and complex terrain, allowing the soldiers to throw the vehicle around, understand how safe and capable it is, letting them practise their camouflage, concealment and vehicle craft.”

“The Boxer CRV is far more capable, protected, lethal and enabled,” he said.

“The armoured protection is better, the cross-country mobility is greater, and the turret, main gun and optic systems are also much more advanced.

“With the increased range of the gun and greater optics package in the turret, the lethality is far greater.

“It allows us to achieve greater standoff [distance] from our targets.”

Trooper Michael O’Brien has spent the past few months completing his ASLAV conversion courses and is now part of a Boxer CRV crew and explained how impressed he was with the new platform.

“What I love about the Boxer is the digital capability it provides,” Trooper O’Brien said.

“The crew commander can use the hunter-killer system to find more targets, allowing the gunner to re-engage, then re-engage again.

Major Solomon said he was grateful for the opportunity to train with the Boxer CRV as it entered service with the Army.

“It’s very exciting to be part of this. The Boxer CRV is on its way to being one of the greatest armoured fighting vehicles in the world,” he said.

“It’s a privilege to be part of the journey of the Boxer’s introduction into service.

“It shows that the Australian Army is at the forward edge of armoured fighting vehicle technology around the world.”

Tell a friend:
Boxers Fire Up in Rugged Bout