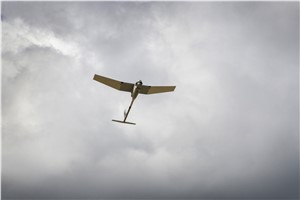 The contract option was exercised under the Army’s FCS domain awarded to AeroVironment in June 2019 and announced in November 2019 – the first of six domains comprising the Army’s existing five-year Indefinite Delivery, Indefinite Quantity (IDIQ) SUAS contract – bringing the total final value of contract to $54,632,776.

“The Raven system was created to provide frontline forces with real-time, accurate over-the-horizon situational awareness in conflict areas; a capability that was unavailable at the time of its inception,” said Trace Stevenson, vice president and product line general manager of small UAS. “Today, Raven is the most widely deployed unmanned aircraft system in the world and continues to serve as a modern tool for customers to gain superiority on the battlefield.”

The Raven system is designed for rapid deployment and high mobility for operations requiring low-altitude intelligence, surveillance and reconnaissance (ISR). With a wingspan of 4.5 feet and weighing just 4.2 pounds (1.9 kilograms), the hand-launched Raven provides situational awareness, day or night, with an operational range of 6.2 miles (10 kilometers). The Raven’s Mantis i23 EO/IR gimbaled payload delivers real-time video or infrared imagery to ground control and remote viewing stations.