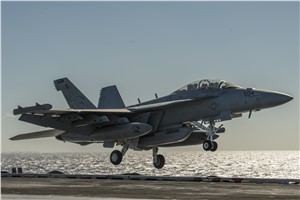 The State Department has made a determination approving a possible Foreign Military Sale to the Government of Australia of EA-18G Growler Aircraft, Related Defense Services, and related equipment for an estimated cost of $125 million. The Defense Security Cooperation Agency delivered the required certification notifying Congress of this possible sale today.

The Government of Australia has requested to buy a United States Navy (USN) EA-18G aircraft. The USN EA-18G aircraft will then be modified into a Royal Australian Air Force (RAAF) EA-18G aircraft configuration. The sale would include one (1) EA-18G Growler aircraft (Lot 38 or later) and engineering and modification; verification and validation flight test efforts; maintenance and storage; U.S. Government and contractor engineering/technical assistance; related studies and analysis support; and other related elements of programmatic, technical and logistics support. The total estimated value is $125 million.

This proposed sale will support the foreign policy and national security objectives of the United States. Australia is one of our most important allies in the Western Pacific. The strategic location of this political and economic power contributes significantly to ensuring peace and economic stability in the region. It is vital to the U.S. national interest to assist our ally in developing and maintaining a strong and ready self-defense capability.

This proposed sale will allow Australia to effectively maintain its current force projection capability that enhances interoperability with U.S. forces well into the future and maintain their original primary level of aircraft authorized. This aircraft would replace Australia’s EA-18G A46-311 aircraft lost in an accident at Nellis Air Force Base. Australia currently employs the EA-18G and will have no difficulty absorbing this equipment into its armed forces.

The proposed sale of this aircraft and follow-on support will not alter the basic military balance in the region.

These aircraft will be provided from U.S. Navy stock. There are no known offset agreements proposed in connection with this potential sale.

Implementation of the proposed sale will require U.S. Government and contractor personnel to visit Australia on a temporary basis in conjunction with program technical oversight and support requirements, including program and technical reviews.