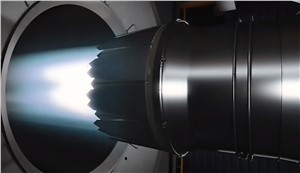 Full-scale prototype engine testing in the AETP program is the capstone of a multi-year technology maturation and risk reduction effort to bring an adaptive cycle engine to full maturity in close partnership with the U.S. Air Force. GE’s first XA100 engine tests began in December 2020, marking the world’s first ever run of a flight-weight three-stream adaptive cycle engine. Tests successfully validated the engine’s ability to deliver transformational propulsion capability to current and future fighter aircraft. Engine prototypes assembled as part of AETP are designed to fit and integrate directly into the F-35.

“The U.S. Air Force and Congress have invested more than $4 billion in adaptive cycle engine development over the past 14 years to mature its associated technologies. We’re confident this phase of the program will significantly reduce risk and prepare GE for a low-risk engineering and manufacturing development program, consistent with Air Force objectives,” said David Tweedie, GE Edison Works’ General Manager for Advanced Combat Engines. “Getting our second prototype engine into the test cell means we’re one step closer to getting this transformational technology into the hands of the warfighter.”

“The Air Force has put a tremendous amount of rigor into the AETP product requirements. We believe we’re delivering on those requirements, and a big reason for that is our close collaboration with the Air Force. Our partnership there has been a critical factor in our success,” Tweedie added.