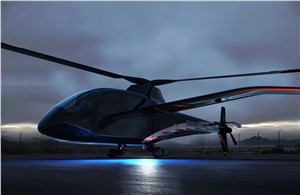 HyPoint, the company developing zero carbon-emission turbo air-cooled hydrogen fuel cell systems for aviation and urban air mobility, today announced that it has entered into a multi-phase collaborative development agreement with Piasecki Aircraft Corporation (PiAC), a pioneer in advanced rotorcraft and unmanned aircraft systems (UAS) platforms and technologies, for the development and certification of a hydrogen fuel cell system for electric vertical takeoff and landing (eVTOL) vehicle applications. The initial $6.5 million agreement will culminate in the development of five 650kW hydrogen fuel cell systems for use in Piasecki's eVTOL PA-890 Compound Helicopter, which is expected to be the world's first manned hydrogen-powered helicopter.

The partnership's objective is to deliver a customizable, FAA-certified, zero carbon-emission hydrogen fuel cell system to the global eVTOL marketplace. The system will offer eVTOL makers four times the energy density of existing lithium-ion batteries; twice the specific power of existing hydrogen fuel cell systems; and up to a 50% reduction in direct operating costs relative to turbine-powered rotorcraft. Piasecki will gain exclusive license to the technology created as part of the partnership; HyPoint will maintain ownership of its underlying hydrogen fuel cell technology. Piasecki and HyPoint intend to make the new system available to eVTOL makers by customizing it for use in their vehicles. Alternatively, eVTOL makers may choose to partner with HyPoint and Piasecki to develop a new system based on their specific needs.

HyPoint's revolutionary approach utilizes compressed air for both cooling and oxygen supply to deliver a hydrogen fuel cell system that radically outperforms existing battery and hydrogen fuel cell alternatives. Testing has shown that HyPoint's fuel cell system will be able to achieve up to 2,000 watts per kilogram of specific power, which is more than triple the power-to-weight ratio of traditional (liquid-cooled) hydrogen fuel cells systems. It will also boast up to 1,500 watt-hours per kilogram of energy density, enabling longer-distance journeys. In December 2020, HyPoint was named a winner of NASA's iTech Initiative, in which breakthrough technologies were ranked based on criteria that included technical viability, benefits to humanity, and commercialization potential. HyPoint's aviation applications — including eVTOL, UAS, personal air vehicles, and electric aircraft — were considered to be especially innovative.

"The much-anticipated arrival of eVTOLs and similar aircraft has been severely hindered by the technical limitations of existing power systems," said Dr. Alex Ivanenko, founder and CEO of HyPoint. "This new strategic partnership will dramatically accelerate delivery timelines by equipping eVTOL manufacturers with next-generation hydrogen fuel cell systems that meet their unique needs. Together, HyPoint and Piasecki will work to grow the emerging eVTOL market by delivering a certified multiplatform solution for eVTOL makers. In addition, we share a common vision for making safe, cost-effective zero carbon-emission flight a reality for conscientious businesses and consumers around the world."