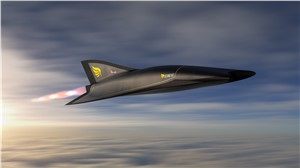 In an effort to accelerate the commercial development of hypersonic aircraft and propulsion systems, the U.S. Air Force is investing in the Hermeus Corporation – a U.S. based aerospace company – via a $60 million jointly funded contract that was awarded July 30.

Currently, the company is developing a hypersonic aircraft capable of flying at five times the speed of sound. At this speed a flight from New York to Paris would only take 90 minutes, compared to the seven and a half hours it typically takes today.

The engagement with Hermeus is part of a larger effort led by the directorate to fuel the burgeoning commercial resurgence of high speed passenger travel, and has been dubbed the “Vector Initiative”.

The initiative aims to partner with commercial sector leaders to accelerate their development and, as a byproduct, advance enabling technologies that could provide the Air Force options for a variety of missions.

AFWERX, an AFRL Technology Directorate – responsible for expanding technology, talent, and transition partnerships for rapid and affordable commercial and military capability – has been an integral part of the initiative’s ability to reach out to industry, and helped make the joint funding effort possible, via its Strategic Financing (StratFI) program. The program is designed to connect Airmen, DoD acquisition offices, and private investors to facilitate the delivery of strategic capabilities for the Air Force. The Hermeus contract will be the first time that the StratFI program has been used.

“We are transforming the Air and Space Force into an early-stage ‘investor’ that leverages private capital, accelerates commercialization of technology and grows the number of companies partnering with the Department of the Air Force,” said Col. Nathan Diller, AFWERX director. “It has been great working with the team to help identify innovative companies with advanced capabilities.”

“One of our goals in supporting companies like Hermeus, is to expand the Defense Industrial Base for both aircraft manufacture, and hypersonic propulsion development,” added Brig. Gen. Jason Lindsey, the Program Executive Officer for Presidential & Executive Airlift. “Ultimately we want to have options within the commercial aircraft marketplace for platforms that can be modified for enduring Air Force missions such as senior leader transport, as well as mobility, ISR, and possibly other mission sets.”

The contract establishes a number of objectives for Hermeus to meet within three years, to include the following:

“When it comes to technology, we often hear the term ‘game-changing,’” said Maj. Gen. Heather Pringle, commander of the Air Force Research Laboratory. “However hypersonic aircraft and propulsion systems are truly game-changing, and will revolutionize how we travel, just as automobiles did in the last century. We are excited to be part of this effort, and to help propel this important technology.”

Following the three year period of performance, the Air Force will evaluate Hermeus’ progress, maturity of the hypersonic technology, and alignment with Air Force priorities.

“This contract award marks a continuation of an excellent partnership with the Hermeus team,” said Capt. Mark Kite, the Vector Initiative’s action officer, “Hermeus is well poised to develop future commercial products that have military application and we look forward to partnering with future companies that exhibit similar opportunities for the Air Force.”