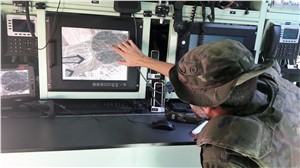 Indra, a leading global technology and consulting company and one of the main players in the global defence technology industry and Thales, a global technology player in the defence, aerospace, security and digital identity and transport markets, have completed the development of the new release of the Battlefield Management System (BMS). It the most advanced and effective tactical command and control solution on the market and with which the Spanish Army ensures superiority in deployments on the ground.

A unit of Spanish Army paratroopers on a fictitious international peacekeeping mission is deployed in to control a confirmed threat: hostile forces have taken positions in two neighbourhoods of an important city. All the air-launchable vehicles in which unit move are fitted with Indra and Thales' BMS tactical command and control system that enables them to display the exact position of each member of the group in real time as they advance towards the objective. There are also infantry taking part in the exercise and they advance in silence, using text messaging for coordination without needing to use their voices. They each carry a ruggedized tablet connected to their tactical radios by Wi-Fi and communicates with the command chain and collaterals. The whole group simultaneously receives orders updated with the mission plan together with images and videos of the objective.

They hear shots and a soldier gets out of the vehicle to inspect the area. She marks the position of a sniper on the digital map on the screen to warn the other units of the hazard. At the same time, she receives an alert that another unit has detected a homemade bomb in a nearby street. The unit requests support to deactivate the explosives and the commanding officer orders a group of sappers to join the mission along with the rest of the deployed forces. Mission command follows the all the events in real time from the base and prepare supporting fire in automatic coordination with the artillery.

This just one of the use cases that the 6th “Almogávares” Paratrooper Brigade, from the "Príncipe" Base in Paracuellos de Jarama near Madrid, has recreated in the exercises carried out recently to test the new release of the BMS system.

This new version provides unique capabilities to operate in demanding bandwidths such as those usually available for tactical communications. This ensures that the system works effectively in the most complex scenarios in which communications are difficult and hostile forces are constantly trying to prevent them. The system is equipped with the capacity to exchange not only text messages and images, but also direct video in real time.

The BMS also integrates perfectly with NATO standards which makes it interoperable with other allied countries’ systems. It also enables the commanding officers who direct the operation to make changes to the order of battle on the spot, reacting instantly to any unforeseen events.

Indra and Thales' BMS is also integrated with the Army logistics management system (SIGLE) to streamline and automate inventory management and with other Army systems through the standard IDT interface for exchange of tactical data.
During the exercise, the SYNAPS radio was also tested. This high capacity tactical radio, with ESSOR SCA architecture, is a bi-band (VHF / UHF) and bi-channel radio specifically designed for collaborative combat and continuity of the chain of command. The SYNAPS capabilities allow the integration of the units through interoperability with the current PR4G combat radios of the Army and the ability to scale new functional features and services that can be integrated into the BMS-ET in the future, preserving security, integrity, confidentiality and resilience of communications. At the same time, it offers Brigade 2035 the possibility of reducing its logistics footprint by covering, with a single radio station instead of three, the communication needs with the upper and lower echelons with a single VHF channel and simultaneously having the high bandwidth performance provided by the UHF channel. At the Command Post, integrated into the BMS-ET, a real-time video was shown transmitted by an observation unit located more than 10 kilometres away.

The Army has already been deployed in real missions abroad with the earlier version of the BMS system that has provided excellent results in facilitating coordination and interoperability with the rest of the allied forces.

The increasing digitisation of the battlefield has made data a decisive factor for any army to prevail over its adversaries. The Spanish Army has been working with Indra and Thales on this advanced system for years; an experience that has helped to positioned it at the forefront of European command and control technologies.

In a world in which the future of defence is increasingly complex, with more and more diverse scenarios and ubiquitous sensors in constant motion, the Army's centre of gravity continues to be the combatants who, however, require technologies that enable them to carry out their missions in collaboration with their allies and also provide data for better and faster decision-making. Consequently, the BMS has become a key tool that provides and manages all the required information in the shortest time possible to ensure the success of the mission. It could be said that this system is the embryo of the future combat cloud in which all systems and platforms, manned or not, will be interconnected, constituting a complex adaptive system in which the key factors are agile operation and the seamless exchange of information.

The degree of technological development that the Spanish Army has reached enables the country to lead the most ambitious European initiatives and address development of the next generation of strategic operational command and control systems at levels higher than the tactical tier already covered by the BMS.

Tell a friend:
Thales and Indra Design the Digital Brain That Will Ensure the Spanish Army's Control of the Battlefield