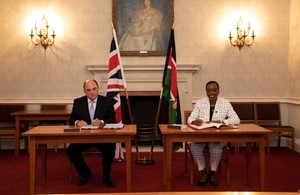 The UK is stepping up its counter-terrorism and military support to Kenya as the two countries signed a new five-year Defence Cooperation Agreement (DCA).

Defence Secretary Ben Wallace and Kenyan Cabinet Secretary for Defence Dr Monica Juma signed the accord during her visit to London yesterday.

The agreement will enable the two countries to enhance coordination in their joint efforts to improve regional security in East Africa, including the fight against Islamist terrorist group Al-Shabaab.

The UK and Kenya already regularly work together to counter the threat from Al-Shabaab, not only through training as strengthened in the DCA, but also by sharing information and identifying new ways to target the group financially with sanctions, and starve them of new recruits by addressing the root causes of violent extremism.

Building on the existing agreement, the new DCA will provide a basis for the exchange of military personnel for defence activity, allowing for enhanced training opportunities and increased collaboration in peace support work.

Defence Secretary Ben Wallace said:
"It was great to meet Dr Monica Juma again today. We held very fruitful discussions and agreed a range of measures to keep both of our countries safer."

"Kenya has long been our defence partner of choice in East Africa and, in a more uncertain world, we will continue to stand shoulder-to-shoulder as we tackle the threats of tomorrow."

The two defence secretaries discussed a range of additional enhanced UK counter-terrorism support to Kenya, including increasing protection for tourists on the coast, where many of the 180,000 British tourists who visit Kenya every year travel to.

They also discussed expanding UK programmes to prevent extremism in coastal and other key areas – including the appointment of a dedicated Maritime Security officer – providing technical support to Kenya’s first terrorism court, enhancing collaboration to counter terrorist financing and increasing training for Kenyan forces to tackle Al Shabaab in the country’s north-east.

Kenyan Cabinet Secretary for Defence, Dr Monica Juma said:
"Today, the Rt Hon Ben Wallace and I reaffirmed our commitment to continue deepening the defence cooperation between our two nations."

"The framework underpinning this strategic relationship is the Defence Cooperation Agreement which has become an invaluable tool for enhancing the competencies of our defence forces. Overall, our cooperation continues to significantly improve the ability of our forces to operate effectively in high-threat environments."

The recently published Integrated Review and Defence Command Paper outlined that in an age of global and systemic competition, our Armed Forces will be persistently globally engaged with partners around the world to tackle emerging threats at their source. Over £24 billion of extra defence spending was also announced over the next four years, giving the UK’s Armed Forces the resources to rise to this challenge.

British troops help to train over 1,100 Kenyan soldiers every year before they deploy to the African Union Mission in Somalia (AMISOM) to fight Al-Shabaab.

The signing of the DCA comes six months after the two defence secretaries met in Nairobi, agreeing a refreshed security compact to deepen cooperation in tackling Al-Shabaab and other shared threats such as cybercrime and human trafficking.