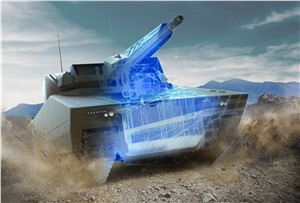 “This is a great win for American Rheinmetall Vehicles and Team Lynx as a whole,” said Matt Warnick, Managing Director of American Rheinmetall Vehicles. “With this contract award, we take another important step forward in bringing the kind of next-generation technology solution, partnership and industrial capability the U.S. Army deserves and that Team Lynx is so well prepared to deliver for the OMFV program.”

Team Lynx will work with the U.S. Army on the digitally engineered design and development of the team’s OMFV concept using Rheinmetall’s proven Lynx KF41 Infantry Fighting Vehicle (IFV) as the point of departure for the design. The team’s solution will provide the U.S. Army with a next-generation infantry fighting vehicle featuring a game-changing platform with a modular open systems architecture. This will enable rapid insertion of new capabilities as they become available, guaranteeing overmatch today and overmatch tomorrow.

Variants of American Rheinmetall Vehicle’s Lynx KF41 IFV are advancing in multiple countries around the world. The Hungarian Army became the launch customer in 2020 with an order for 218 locally produced vehicles. In Australia, for the Land 400 Phase 3 program, Rheinmetall was down selected along with one other combat vehicle manufacturer for a risk reduction test phase that involves extensive vehicle testing comprised of field trials, survivability and mobility testing. The KF41 performed to a high standard.

The Concept Design Phase kicks off the OMFV program and continues through early 2023, laying the foundation for future development and production phases. Team Lynx is developing industrialization plans to fully deliver the OMFV as a Made in the USA, next-generation vehicle. The team will grow U.S. Defense manufacturing capacity and introduce advanced manufacturing capabilities. Competition for Phase 3 (Detailed Design) is anticipated to start in 2023, followed by Phase 4 (Prototype Build and Test), which results in government testing in early 2026.