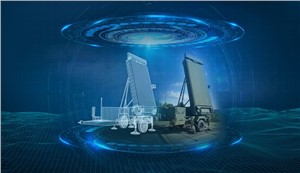 On the modern, dynamic battlefield, agility and connectivity are decisive advantages. Agile and networked warfighters who rapidly adapt to changing adversary tactics, techniques and technologies in real time can outmaneuver and win.

The same goes for the weapon systems those warfighters employ. Modern, software-defined weapon systems that feature multi-functionality and adaptability are needed so that they can continually evolve to counteract new threats.
Seeing Double

A Digital-First Sensor
The Marine Corps’ premier air defense radar, the AN/TPS-80 Ground/Air Task Oriented Radar (G/ATOR) – developed and produced by Northrop Grumman – is one such weapon system. A digital-first sensor, the AN/TPS-80 cyclically receives capability updates with every software load. Its hardware is being improved too – such as transitioning to higher-performance gallium nitride (GaN) semiconductor components from gallium arsenide (GaAs) and by adding transmit/receive modules for longer-range capability.

Northrop Grumman invested in the AN/TPS-80 to become even more agile by creating a digital transformation roadmap and completing initial versions of a digital model or “digital twin” where new software or engineering changes can be developed, demonstrated and deployed in a virtual environment before fielding.

“We’re embracing digital transformation throughout the system lifecycle to deliver solutions with the agility, speed and affordability that our customers require while pushing the bounds of physics,” said Mike Meaney, vice president, land and maritime sensors, Northrop Grumman. “With integrated digital technologies and models, and investments in creating a digital twin, what previously could take years to deploy to the field can be reduced to hours.”

This adaptability of the AN/TPS-80 was demonstrated in a number of field trials and system tests conducted over the past year. At a U.S. government test range, engineers assessed the radar’s ability to withstand varying electronic attack techniques. Northrop Grumman’s engineering team was able to detect and respond to those electronic attacks by implementing countermeasures through software updates in mere hours as compared to days.

The AN/TPS-80 is in full-rate production for the Marine Corps. The service recently awarded Northrop Grumman $236.9 million for eight additional systems.

Value of Connectivity
When multifunction sensors like AN/TPS-80 are securely networked together instead of operating independently, situational awareness and mission effectiveness is significantly enhanced for warfighters operating across all domains. This connectivity goes beyond Marine Corps operations by delivering a 360-degree, multi-dimensional view of the airspace to all of the services.

In the context of the government’s Joint All Domain Command and Control (JADC2) initiatives, all radars operating in theatre – regardless of which service owns them – become a sensing node in the larger, multi-domain warfighting internet of military things (IoMT).

“Creating a secure, open and truly integrated communications network architecture will be critical to maintaining the strategic advantage needed in the age of data-driven conflict,” said Jenna Paukstis, vice president, communications solutions, Northrop Grumman. “Northrop Grumman’s leading advanced networking and sensor technologies will be foundational elements to helping the DOD create this interoperability through rapid deployment of capabilities to realize its vision for JADC2.”