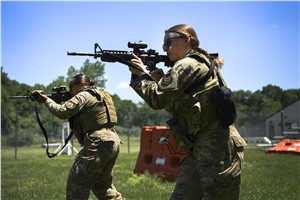 The recently-developed armor is a lighter weight than previous editions and features a curved chest plate and shorter torso size. An adjustable corset tightens to fit the wearer, distinguishing it from a one-size-fits-all piece of equipment.

“It’s exciting to feel represented as a female, and it’s welcoming to know that we have equipment that was made with us in mind,” said Airman Madalyn Duke, 66th SFS entry controller.

Market forecasts by Regions, by Products, and by Applications. Market/Technologies Overview, Opportunity analysis, and Leading Companies

“A fighting force is only as good as the equipment it’s given, and fitting the right equipment to the right person is definitely the right move,” said Lt. Col. Yonca Nice, 66th SFS commander. “The new armor will make our female fighting force safer and more efficient with higher morale.”

During initial training with the new armor June 29, Hanscom security forces members said they noticed a difference in the equipment compared to the standard male-fit predecessor.

“Everything felt very secure and it fit to my body,” she said. “I felt confident it was doing its job to protect me.”

The defenders’ male counterparts are also glad to see the new armor in play.

“It’s reassuring to know our wingmen have equipment that fits them correctly,” said Senior Airman Jayson Page, 66th SFS desk sergeant. “Body armor, specifically, is critical to our mission and it can save your life.”

Duke said she will continue to break in the new equipment and looks forward to accelerated change toward a more inclusive force.

“It’s inspiring to know that there’s a whole new generation of female Airmen who will have the option to use equipment made for us,” she said.