5G Systems Are Critical for the Use of Hypersonic Weapons

5G Systems Are Critical for the Use of Hypersonic Weapons 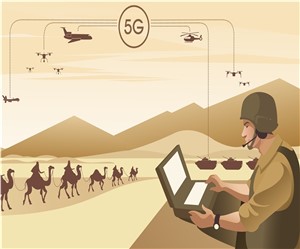 The defense forces across the world are expected to get a lot more out of 5G telecommunications than they can out of today's voice and data radio. It has the ability to build a centralized infosphere with real-time access to data from sensors, targeting, surveillance, and signals intelligence. Instant situational awareness, smart hypersonic missiles with on-the-fly retargeting, quick accessibility to mission-critical intelligence on the frontline of the battlefield, and unmanned aircraft that can fly safely alongside passenger aircraft in commercial airspace are all possible scenarios for 5G.

The 5G system is expected to be critical for the use of hypersonic weapons, which are missiles that fly faster than Mach 5 and can carry nuclear warheads. The key functional enablers are expected to be to guide them on unpredictable trajectories, changing direction in a split second to avoid interceptor missiles, massive amounts of data must be gathered, elaborated, and transmitted in a very short amount of time. In the event of an attack with this type of weapon, the same thing must be done to unlock defense, the only option is to depend on 5G automatic systems.

5G paired with edge computing would serve as the basis for several other emerging innovations and capabilities, many of which are still in development. The decentralized architecture of edge computing brings technology resources closer to where data is generated, reducing response time lags. 5G and edge computing, when combined with 5G's large bandwidth, super-fast speeds, and significantly lower latency, is expected to enable the military to realize the full potential of innovations like artificial intelligence (AI), Internet of Things (IoT), robots, immersive reality, and automation.

In comparison to 4G networks, which operate with longer-wavelength, lower-frequency signals at usually 3.5 GHz and below, 5G wireless networks are expected to rely on higher-frequency signals, such as 28 GHz and above, traveling shorter distances. Transmission rates of 4G wireless networks have been rapidly reduced to the Mb/s range due to the consumption of bandwidth at lower frequencies. 5G system designers, on the other hand, hope to achieve transmission rates of 1 Gb/s and higher, but over shorter distances than 4G networks. The usable bandwidths and transmitting rates of 5G networks, as well as the decreased latency times of higher-frequency millimeter-wave signals, are expected to support military personnel.

Unmanned aerial vehicles (UAVs), are being used by defense forces across the world for surveillance missions. They do not, however, send and exchange 4K images in real-time with C2 centers and combat units. With 5G, 4K images, object tracking, faster data processing, and artificial intelligence, reconnaissance missions would be more effective by sharing data to units about what they might be facing.

The true significance of 5G can be seen in its effect on the future war network. A greater number of less costly, more connected, and more robust systems capable of operating in a rapidly changing combat scenario would support this network. Furthermore, 5G would combine fragmented networks into a single network, allowing soldiers to be more aware of their position and make better decisions. Positive effects can also be felt at the logistics and maintenance levels.

Secret services and special forces are also expected to benefit greatly from 5G. It is expected to make much more powerful control and espionage systems than those currently in use. It will increase the lethality of killer drones and war robots by allowing them to recognize, track, and target people based on facial recognition and other characteristics. As a high-tech arm, the 5G network is also expected to be a target for cyber-attacks and wars involving next-generation weapons.

The Department of Defense has collaborated with the Federal Communications Commission (FCC) and other government agencies to figure out how to make the most of the new technology and large blocks of the frequency spectrum that 5G wireless networks need. For example, the DoD has obtained design feedback from a broad range of 5G equipment suppliers as starting points for military systems using 5G technology by collaborating with the DoD-sponsored National Spectrum Consortium.

The same Internet of Things (IoT) sensors that are attractive for commercial and industrial 5G applications, such as smart homes and smart cities, are expected to support smart warehouses or even smart training areas for military personnel. Fast data transfers, for example, between surveillance UAVs and their controllers, are enabled by instant internet connectivity through high-speed data links at mmWave frequencies. As new frequencies and bandwidth open up new vistas for military device designers, military specifiers are expected to profit from the commercial-off-the-shelf (COTS) availability and pricing that 5G would bring to mmWave components.

The Pentagon is moving rapidly to implement 5G networking capabilities, which aim to provide users with ultra-fast connectivity and low latency. To enable all defense functions, including fires, command and control, intelligence, movement and maneuver, security, sustainment, and information, the Pentagon plans to improve 5G infrastructure and invest in potential "Next-G" systems. By improving inventory management, reordering, supply and maintenance analytics, automated warehouses, and the process by which the joint force performs resupply, 5G technology is expected to provide enhanced joint logistics responsiveness, precision, flexibility, and economy around the world, now and in the future.

Tell a friend:
5G Systems Are Critical for the Use of Hypersonic Weapons