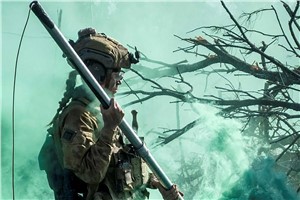 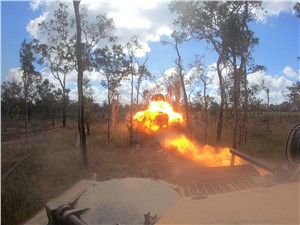 Sappers from the 2nd Combat Engineer Regiment (2CER) made an explosive return to combined live-fire training during Exercise Diamond Walk.

“Each of the obstacles that supported the breach training were constructed by the combat engineers to create a realistic training scenario for a combat-team assault onto an objective.”

During the execution of an offensive operation serial, 7 CE Sqn sappers detonated charges on obstacles, allowing Abrams tanks from the 2nd/14th Light Horse Regiment (Queensland Mounted Infantry) and M113AS4s from 6RAR to pour through and seize the objective.

Many units from the 7th Combat Brigade have had a busy two years, but few have been as busy as 2CER.

“We still have a long way to go in refining our combat engineering skills,” Major MacDougall said.

“Combined-arms exercises such as Diamond Walk are invaluable and offer us the best opportunity to integrate and provide the world-class effects we promise to deliver.”

Sapper Hayden Sampson has been with 2CER for three years and said Diamond Walk was by far the largest exercise he has been involved in.

“It was great to get back on the tools and back into explosive breaching, especially working with infantry and showing them our capability and vice versa,” Sapper Sampson said.

“Some of our Bangalores created an eight-metre lane without us even having to leave our M113AS4 after we had initiated our explosives, allowing the tanks to roll-on through.

“Obviously, speed is key and they can just punch through without hesitation.”

Diamond Walk was also the first time 7 CE Sqn was able to deploy as a complete mechanised combat engineer squadron since receiving an allocation of M113AS4 vehicles in early 2019.