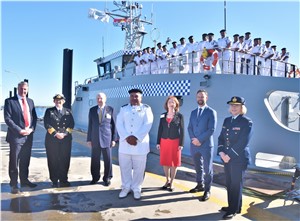 The vessel, the RKS Teanoai II, was then gifted by the Australian Government to the Government of the Republic of Kiribati at a certificate signing ceremony held at Austal Australia’s Henderson shipyard. The ceremony was attended by Mr Vince Connelly MP, Member for Stirling, Rear Admiral Wendy Malcolm, Head of Maritime Systems within the Department of Defence Capability Acquisition and Sustainment Group (CASG), Air Commodore Fiona Dowse, Senior ADF Officer WA, Ms Fleur Davies, Assistant Secretary, New Zealand, Polynesia and Micronesia at the Department of Foreign Affairs and Trade; and Honorary Consul-General of Kiribati, Mr Paul Wenham.

The vessel is the first Guardian-class Patrol Boat to be delivered to Kiribati under the Pacific Patrol Boat Replacement Project (SEA3036-1), part of the Australian Government’s Pacific Maritime Security Program; and replaces the original RKS Teanoai, a Pacific-class Patrol Boat delivered in 1994.

Austal Chief Executive Officer Paddy Gregg said the latest delivery of the Pacific Patrol Boat Replacement Project highlighted the resilience, flexibility and efficiency of the teams collaborating from Austal Australia and the Department of Defence.

“The Teanoai II was originally scheduled for delivery in the middle of 2020, but due to the COVID19 pandemic was postponed until such time as we could get the Kiribati crew safely into Australia,” Mr Gregg said.

“While the delivery of this particular vessel was postponed, it did not affect, delay or hinder the construction or delivery of subsequent Guardian-class Patrol Boats and we remain on track to deliver all 21 vessels by the end of 2023.

“The Austal Australia and SEA3036-1 Project teams have worked together successfully to maintain productivity and meet the objectives of the Pacific Patrol Boat Replacement Project, throughout the COVID19 pandemic.

“Our warmest congratulations go to the President of Kiribati, His Excellency Taneti Maamau; Commissioner of Kiribati Police Service, Mr Ioeru Tokantetaake; Superintendent of Police and Commanding Officer of the RKS Teanoai II, Tom Redfern; and the people of the Republic of Kiribati on the handover of this outstanding new patrol boat.”

Faster, with improved seakeeping, better amenities and an enhanced mission capability – including an integrated RHIB stern launch and recovery system – the Guardian-class Patrol Boats provide the Kiribati Police Force with a much improved naval asset to carry out border patrols, regional policing, search and rescue, and many other operations domestically and internationally.

The Pacific Patrol Boat Replacement (PPB-R) Project was awarded to Austal in May 2016, with an additional contract option awarded in April 2018, taking the program to 21 vessels, valued at more than A$335 million.