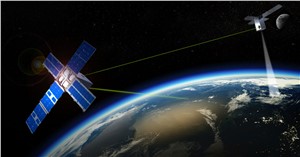 General Atomics Electromagnetic Systems (GA-EMS) announced today that its Laser Interconnect and Networking Communication System (LINCS) satellites have arrived at Kennedy Space Center, Cape Canaveral, FL to prepare for launch. Using LINCS, GA-EMS in partnership with the Space Development Agency (SDA) will conduct a series of experiments demonstrating optical communication in and from space. The LINCS satellites will be launched on a SpaceX Falcon 9 rocket.

“The arrival of GA-EMS’ LINCS system at Cape Canaveral marks the start of final preparations and integration on board the Falcon 9, bringing us one step closer to demonstrating the next evolution of space-based optical communication,” stated Scott Forney, president of GA-EMS. “It is an honor to support SDA on their first launch and to demonstrate this critical technology that will enable the future national security space architecture.”

The LINCS system is comprised of two 12U cubesats each hosting a C-band dual-wavelength full duplex Optical Communication Terminal (OCT) and an Infrared (IR) payload, with all elements internally designed and built by GA-EMS at their facilities in San Diego, CA and Huntsville, AL. In partnership with SDA, this is one of the first Department of Defense contracted efforts to develop and deploy a state-of-the-art 1550nm OCT to test capabilities to increase the speed, distance, and variability of communication in space.

“The launch of our two cubesats, supporting the LINCS mission, demonstrates GA-EMS’ ability to provide a complete tailored solution of both satellites and payloads integrated into an affordable design that provides customers significant launch versatility and cost effective solutions to their missions,” stated Nick Bucci, vice president of Missile Defense and Space Systems at GA-EMS.