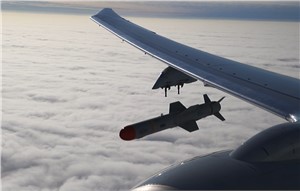 VP-40 and VP-4 worked as one unit to plan the coordination of flights, mission timeline, and launches. Plans for exercise safety and communications were developed in close cooperation with allies to enable the firing event. The successful result reaffirmed the global reach of the P-8A and its capability to conduct Surface Warfare engagements when directed to provide offensive or defensive support to a maritime task group.

“Sea control is maintained by the ability to employ kinetic effects,” said Cmdr. Matthew Letcher, VP-40 commanding officer. “Our performance with partner units and allies in exercises like At-Sea Demonstration/Formidable Shield delivers confidence in an uncertain world and sends a message to friends and potential adversaries alike.  On this inaugural P-8A deployment for VP-40, the Fighting Marlins have already made significant contributions to the international maritime security picture while conducting sustained operations across Sixth Fleet.”

At-Sea Demonstration is a recurring live maritime exercise planned and supported by the Maritime Theater Missile Defense Forum (MTMD-F), a coalition of twelve nations with a focus on improving interoperability and force capabilities in maritime missile defense.

By the conclusion of the exercise, there were approximately 3,300 personnel, 16 naval vessels, and more than 31 aircraft that participated in the training exercise conducted on the U.K. Ministry of Defense’s Hebrides Range located on the Western Isles of Scotland and the Andøya Space Defense facility in Andenes, Norway. Alongside the United States, participating nations included Belgium, Denmark, France, Germany, Italy, the Netherlands, Norway, Spain, and the United Kingdom.

VP-40 is currently assigned to Commander, Task Force (CTF) 67 and is deployed to the U.S. Sixth Fleet area of responsibility. CTF 67 is composed of land-based maritime patrol aircraft that operate over the waters of the Mediterranean and North Atlantic conducting anti-submarine, reconnaissance, surveillance, and search and rescue missions.

U.S. Sixth Fleet, headquartered in Naples, Italy, conducts the full spectrum of joint and naval operations, often in concert with allied and interagency partners, in order to advance U.S. national interests and security and stability in Europe and Africa.