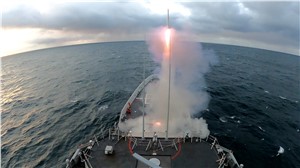 “Missile detected!” is announced over the ships speakers. Quickly, the commander orders a response and fires a missile to shoot the threat before it can reach its target. A service member pushes a single button, everyone collectively holds their breath, watching a computer screen as the missiles track toward each other in outer space. Finally, the room breaks out in cheers as the missile intercepts and destroys the threat.

While most of us are familiar with this type of action movie and know what to expect, the real world threat of ballistic missiles and the response is far more complex.

As part of NATO’s Deterrence and Defense of the Euro Atlantic Area, Naval Striking and Support Forces (STRIKFORNATO), based in Portugal, is a rapidly deployable, maritime headquarters that provides scalable command and control across the full spectrum of warfare areas.  A key part of this mission is integrated air and ballistic missile defense on behalf of the NATO Alliance.

Biannually, members of the Alliance come together to train and demonstrate missile defense capabilities. This year, 15 ships from ten nations are participating in exercise At-Sea-Demo/Formidable Shield 2021 taking place from May 15 to June 3 at the Hebrides and Andøya Space Defense Ranges. Firing missiles into space, tracking, and engaging targets allows the allied nations to test their technology and interoperability. This year’s exercise is the first iteration of a series of exercises to feature ground-launched supersonic targets.

“As NATO Allies, we are facing some of the most challenging threats both at sea and on land,” said Rear-Admiral James Morley, Deputy Commander of STRIKFORNATO.  “The At-Sea-Demo/Formidable Shield 2021 exercise provides the Alliance the opportunity to test multi-domain integration; joining up the land, air, sea, space and cyber domains. Being able to effectively share information and understanding of an evolving picture across the NATO Alliance ensures we are ready to respond if needed.”

Missiles that can be launched from thousands of kilometers away and strike throughout Europe, STRIKFORNATO provides command and control for the missile defense forces.  Over the past two years, the headquarters analyzed how to best provide multi-domain support to deployed forces while investing in key technology to enhance interoperability.

Naval Striking and Support Forces NATO, based in Oeiras, Portugal, is a rapidly deployable, maritime headquarters that provides scalable command and control across the full spectrum of warfare areas.

U.S. Sixth Fleet, headquartered in Naples, Italy, conducts the full spectrum of joint and naval operations, often in concert with joint, allied and interagency partners, to advance U.S. national interests and security and stability in Europe and Africa.

Tell a friend:
STRIKFORNATO Training to Defend Against Supersonic Threats